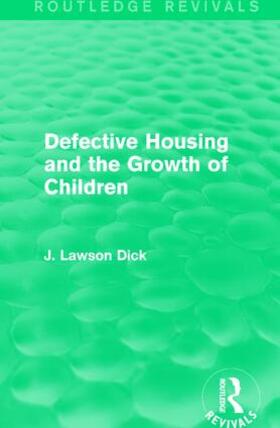 Dick Defective Housing and the Growth of Children

Dick Defective Housing and the Growth of Children

After World War I, housing was one of many pressing issues facing the country with multiple families often crowded in together in inadequate housing. This had a dramatic impact on health with increasing problems such as tuberculosis and malnutrition. Originally published in 1919, this study aimed to identify the ways in which defective housing impacted on health in the family with a particular focus on rickets in children in the East end of London and the developmental issues resulting from it. This title will be of interest to students of Medical History and Health and Social Care.

1. Introductory 2. The Stigmata of Rickets 3. The Teeth in Rickets 4. Some Further Observations of the Teeth 5.The Mental Development in Rickets—The Endocrinous Glands and Rickets 6. The Causation of Rickets 7. The Remedy