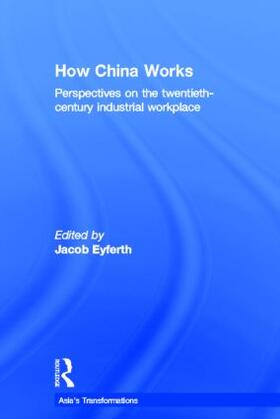 Perspectives on the Twentieth-Century Industrial Workplace

Spanning the whole of the twentieth century, How China Worksexamines the labour issues surrounding the workplace in China in both the Republican and People's Republic epochs. Theinternational team of contributors treat China'stwentieth-century revolution as an industrial revolution, stressing that China's recent emergence as the new workshop of the world was a gradual change, and not a recent phenomena led by external forces.
Providing the reader with extensive ethnographic research on topics such as culture and community in the workplace, the rural-urban divide,industrialization, subcontracting and employment practices, How China Works really does ground the study of Chinese work in the daily interactions in the workplace, the labour process and the micropolitics of work.

Eyferth, Jacob
Jacob Eyferth is assistant professor of history at Simon Fraser University, Vancouver. He is the co-editor of Rural Development in Transitional China: The New Agriculture (London: Frank Cass 2003) and author of articles in The China Quarterly and the Journal of Peasant Studies.