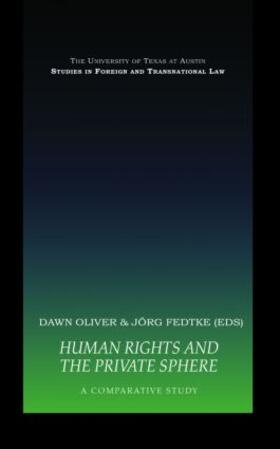 Particularly valuable for both academics and practitioners, Human Rights and the Private Sphere: A Comparative Study analyzes the interaction between constitutional rights,freedoms and private law.
Focusing primarily on civil and political rights, an international team of constitutional and private law experts have contributed a collection of chapters, each based around a different jurisdiction. They include Denmark, France, Germany, India, Ireland, Israel, Italy, New Zealand, the UK, the US, the European Convention for the Protection of Human Rights and Fundamental Freedoms and the European Union.
As well as exploring, chapter by chapter,the key topics and debates in each jurisdiction, a comparative analysisdraws the sections together; setting-out the common features and differences in the jurisdictions under review and identifies somecommon trends in this important area of the law.
Cross-references between the various chapters and an appendix containing relevant legislative material and translated quotations from important court decisions makes this volume a valuable tool forthose studying and working in the field of international human rights law.

Fedtke, Jörg
Dawn Oliver is Professor of Constitutional Law at University College London. She is particularly interested in constitutional reform, the UK Human Rights Act 1998, and the public law/private law divide. She recently published Constitutional Reform in the United Kingdom (OUP, 2003) and is co-editor of The Changing Constitution (OUP, 6th edn 2007). In 2005 she was elected a Fellow of the British Academy.
Jörg Fedtke is Reader in Laws at University College London, where he is Director of the Institute of Global Law. He also holds a post as Visiting Professor at the University of Texas at Austin, where he teaches European Union and comparative constitutional law. In 2005 he was invited by the United Nations to act as an external advisor to the constitutional negotiations in Iraq. His research interests are in constitutional law, administrative law, comparative methodology and tort law.