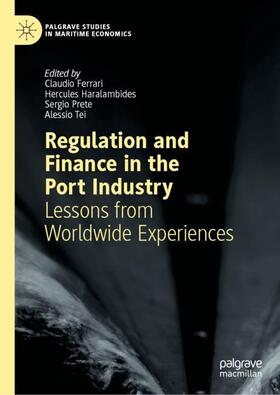 Ferrari / Haralambides / Prete Regulation and Finance in the Port Industry

Bücher versandkostenfrei
kostenlose Rücksendung
This book addresses the latest organizational, regulatory, and governance issues of main port systems, linking them to the financial aspects that are currently in use regarding investments in the port industry. A general review of port management and operations is complimented by analysis of country specific systems and a look at how ports could develop in the future.

This book aims to examine how different port organizational and regulatory contexts affect port investment practices and related financial tools. The book is of use to researchers and practitioners interested in maritime economics and transportation studies.

Ferrari, Claudio
Claudio Ferrari is Full Professor of Applied Economics at the University of Genoa, Italy, and member of the scientific board of the Italian Centre of Excellence for Integrated Logistics. He is the Director of the Ph.D. program in Marine Science and Technologies. His scientific research is focused on transport economics, transport planning and regional economics, namely with regards to ports and transport infrastructures. He is author of over 150 contributions published in academic journals and books. He is member of the Editorial Board of Transport Policy, International Journal of Transport Economics (IJTE), European Transport Research Review (ETRR) and the Rivista di Economia e Politica dei Trasporti (REPoT). Since February 2016 he has been General Secretary of the Italian Association of Transport Economics and Logistics (SIET). He has been involved in many academic research programs and consultancy studies on the transport sector commissioned by organisations such as the European Commission, the Genoa Port Authority, and several private companies and government departments in Italy. Since 1992, Hercules Haralambides is Professor of Maritime Economics and Logistics, having taught at 9 universities (and in 7 different countries), most prominent of which being Sorbonne University, Erasmus University Rotterdam, and National University of Singapore. Currently he is also Distinguished Chair Professor at Dalian Maritime University (China) and Adjunct Professor at Texas A&M University (USA). Hercules is the founder of the Erasmus Center for Maritime Economics and Logistics (MEL) (www.maritimeeconomics.com) and also the founding Editor-in-Chief of the quarterly journal Maritime Economics & Logistics (MEL), published by Palgrave-Macmillan (www.palgrave.com/41278). He has written and published over 300 scientific papers, books, reports and articles in the wider area of ports, maritime transport and logistics and has consulted governments, international organizations and private companies all over the world including, for a number of years, the European Commission. In the period 2011-2015 Professor Haralambides was President of the Italian port of Brindisi and at the end of that period (2015) he established "Haralambides & Associates": a global maritime think-tank engaged in executive education and strategic policy analysis. In 2008, Professor Haralambides was decorated with the Golden Cross of the Order of the Phoenix, by the President of the Hellenic Republic.
Sergio Prete is Professor of Port Management at the University of Bari "Aldo Moro", Italy. From 2011 to 2015 he was appointed President of the Port Authority of Taranto, and subsequently, he was appointed Commissioner Extraordinaire of Port Authority of Taranto from July 2015 to November 2016.In 2012, he was nominated Member of the "Expert Committee" of the Shanghai International Shipping Institute - the research institute from Shanghai which supports the Chinese Government and private/public Chinese maritime operators in the transport and logistics sector - with whom he cooperated in the research field.
Alessio Tei is currently working at the Department of Economics of the University of Genoa as Associate Professor in Applied Economics. Previously, Alessio has worked at Newcastle University as Lecturer in Maritime Economics and he has cooperated as adjunct professor with several other institutions, among which University of Eastern Piedmont and the Naval Academy of Leghorn. During his career, Alessio was a visiting researcher at the Department of Transport and Regional Economics of University of Antwerp.