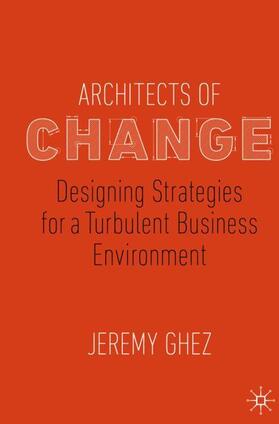 What is the difference between a fire fighter and an architect? One deals with crises as they arise while the other is capable of building something that can withstand all weathers.

Using this analogy, Architects of Change provides you with the tools to grasp, leverage and harness the dynamics that shape tomorrow's markets. It encourages you to nurture an entrepreneurial mind-set to transform the way a business – or even an entire industry – operates. Tackling crucial topics related to geopolitics, creative destruction, fake news, resilience and creativity, this book gives you the tools to analyse your environment and future trends in order to reinvent the way you do business. It teaches you how to:

· Conduct simulations about the future

· Become an architect of change yourself.

Containing original interviews with industry insiders, including a world-famous expert on brands and luxury, the former CEO of a major think tank, a thought leader from CISCO, the former chairman of the US National Intelligence Council, and a former chief political scientist of a large Asian bank, this book helps you to understand the type of imagination and creativity this business environment requires not only to survive, but thrive.

1: A Tale of Two Professions.- 2. Case Study: When James Bond Met Q.- 3. The World We Live In.- 4. Case Study: The Change-maker Game.- 5. The Road to Reinvention.- 6. Case Study: Founding a Popular Pizza Place in Paris.- 7. The Power of Analysis.- 8. Case Study: Strategising at Amazon When Globalisation Comes Under Pressure.- 9. The Significance of Anticipation.- 10. Case Study: Getting Ready for the World in Five Years.- 11. The Purpose of Imagination.- 12. Case Study: Conducting a Pre-Mortem.- 13. The Meaning of Creativity.- 14. Case Study: Looking for Talent in a Chaotic World.- 15. A Tribute to my Kids (The Ultimate Architects of Change).

Ghez, Jeremy
Jeremy Ghez is an Affiliate Professor of Economics and International Affairs at HEC Paris, France. He is the Scientific Director of the school's master program in Sustainability and Social Innovation as well as the Academic Director of the HEC Paris Centre for Geopolitics. His research and teaching focuses on populism, the global business environment, strategic foresight, tech giants, as well as on US and European politics. Previously, he was an assistant policy analyst and a research fellow at both the RAND Corporation and RAND Europe. Having received an award for his case study on 'The Economics of Amazon' in 2016, Jeremy was later named one of the world's top under-40 MBA professors by Poets and Quants in 2019. He has appeared on Bloomberg and France 24, as well as in various French media. An American and French citizen, Jeremy currently lives in Paris with his wife and three children.