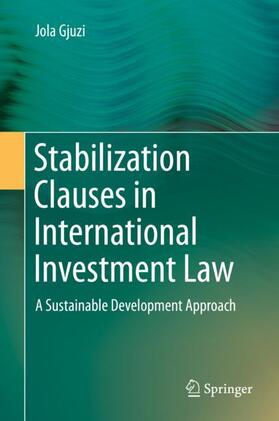 This book analyzes the tension between the host state’s commitment to provide regulatory stability for foreign investors – which is a tool for attracting FDI and generating economic growth – and its evolving non-economic commitments towards its citizens with regard to environmental protection and social welfare. The main thesis is that the ‘stabilization clause/regulatory power antinomy,’ as it appears in many cases, contradicts the content and rationale of sustainable development, a concept that is increasingly prevalent in national and international law and which aims at the integration and balancing of economic, environmental, and social development. To reconcile this antinomy at the decision-making and dispute settlement levels, the book employs a ‘constructive sustainable development approach,’ which is based on the integration and reconciliation imperatives of the concept of sustainable development as well as on the application of principles of law such as non-discrimination, public purpose, due process, proportionality, and more generally, good governance and rule of law. It subsequently re-conceptualizes stabilization clauses in terms of their design (ex-ante) and interpretation (ex-post), yielding stability to the benefit of foreign investors, while also mitigating their negative effects on the host state’s power to regulate.