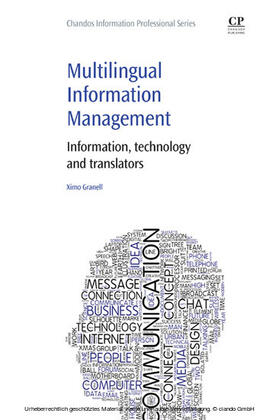 Multilingual information is in high demand in today's globalised economy. Industry and market globalisation, intensified collaboration between European countries, technological developments, the advent and consolidation of the Internet, the rise of electronic business, and the increased use of electronic documents are some of the factors that have fuelled this need. Multilingual Information Management draws on previous empirical research to explore how information and technologies are used within the community of translators as information facilitators among different languages and cultures, to help them become more productive and competitive in today's market. The book consists of three parts, including a literature review on information and technology needs among translators; a research framework to investigate the perceptions and use of information and technology within their working environment; and a strategic proposal for an Information Systems approach to multilingual information professionals and information literacy training.

Granell, Ximo
Ximo Granell is a lecturer and researcher in Information Science at Universitat Jaume I of Castellón, in Spain. Holding a PhD in Information Systems from Loughborough University, United Kingdom, and being a Translation and Interpreting graduate and a Business Management postgraduate, his academic background has intertwined with the fields of information management, translation, and information systems. Ximo has taught at undergraduate and master courses for several universities on information management, business information systems, translation technology, and video game localisation, topics on which he has researched and published in international journals, books, and conferences. He has also worked as a translator specialised in software, website and video game localisation, as well as in ICT, marketing and business communication translation. His research interests include developing information literacy in specialised contexts, applying information systems to the translators' community of practice, assessing information competences and evaluating the quality of scientific research.