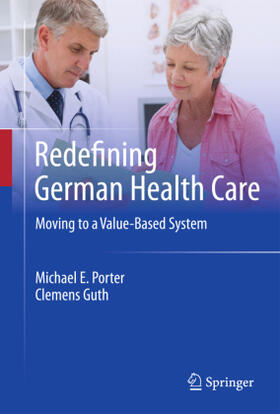 Moving to a Value-Based System

The German health care system is on a collision course with budget realities. Costs are high and rising, and quality problems are becoming ever more apparent. Decades of reforms have produced little change to these troubling trends.
Why has Germany failed to solve these cost and quality problems? The reason is that Germany has not set value for patients as the overarching goal, defined as the patient health outcomes achieved per euro expended.
This book lays out an action agenda to move Germany to a high value system: care must be reorganized around patients and their medical conditions, providers must compete around the outcomes they achieve, health plans must take an active role in improving subscriber health, and payment must shift to models that reward excellent providers. Also, private insurance must be integrated in the risk-pooling system.
These steps are practical and achievable, as numerous examples in the book demonstrate. Moving to a value-based health care system is the only way for Germany to continue to ensure access to excellent health care for everyone.

Guth, Clemens
Clemens B. Guth is the CEO of two private hospitals owned by Artemed Kliniken, a German national hospital provider. In addition to hospital operations, he is responsible for M&A and quality management across Artemed. Previously Dr. Guth worked as a health care consultant for McKinsey & Company. His client work included studies for German hospital groups, statutory and private health plans as well as regional outpatient associations. Before joining McKinsey & Company, he started his professional career as a Junior Doctor at the Chelsea & Westminster Hospital in London.

Dr. Guth earned an M.B.B.S. from the Imperial College Medical School, London, and an M.B.A. from Harvard Business School. He was awarded honors and prizes for both degrees. He is a scholar of the German National Academic Foundation and the German Academic Exchange Service program. For several years, Dr. Guth has published scholarly contributions on health care subjects.

Porter, Michael E.
Michael E. Porter is a leading authority on competitive strategy and the competitiveness of countries, regions, and cities, and the application of strategic principles to societal problems. Based at Harvard Business School, his ideas and personal leadership have influenced countless governments, companies, and scholars across the globe. Professor Porter’s thinking on strategy is taught in virtually every business school in the world, and his work on competitiveness is an integral part of modern economic development theory and practice.

Professor Porter’s work on health care dates back more than a decade. His seminal book, Redefining Health Care, has shaped the new field of value-based health care delivery. The book, together with a series of additional publications, is successfully inspiring change in health care providers and governments across the globe.

An aerospace engineering graduate of Princeton, Professor Porter has an M.B.A. from the Harvard Business School, where he was a George F. Baker Scholar, and a Ph.D. in business economics from Harvard University. He has received numerous awards and honors, including six McKinsey Awards for the best Harvard Business Review article of the year, national honors in a number of countries, and the highest award of the Academy of Management for scholarly contributions to management.