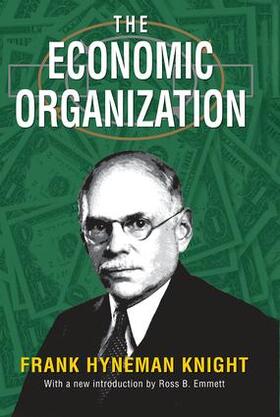 When originally released, Frank Hyneman Knight's The Economic Organization revitalized the teaching of economic theory in America during the 1930s, laying the foundation for the price theory revolution led by economists emerging from Knight's circle at The University of Chicago. Knight shows that when societies choose to allow market organization, their economy simultaneously solves the fundamental functions of valuation and efficiency. It also organizes the production and distribution of resources, providing incentives for progress.The Economic Organization provides a short introduction to the basic principles of supply, demand, and distribution that emerge from neoclassical price theory. The central role of the price mechanism in market organization is illustrated neatly by Knight's "wheel of wealth" the circular flow diagram most often identified with macroeconomic flows, but introduced here for price theoretic reasons. This version also includes his essay on "Utility and Cost," which provides a seamlessly integrated alternative-cost interpretation of neoclassical theory.This expanded edition of The Economic Organization includes a new introduction by Ross B. Emmett, which expands upon the short note on capital theory inserted in the original. Knight wrote three versions of the note for student use, and all three are included in the second chapter. Few books have changed the landscape of American economics and economic education as much as Knight's The Economic Organization. This book should be read by all economists, historians, and policy makers.

Preface and AcknowledgementsIntroduction to the Transaction EditionPart IThe Economic Organization1Social Economic Organization2The Price System and the Economic ProcessAppendix 1Published "Note" at End of ChapterAppendix 2Notes on Economic Theory Materials in Syllabus for Social Science II (1938)Appendix 3Notes on "The Price System and the Economic Process"3Demand and Supply and Price4Distribution: The Pricing of Productive Services IndividuallyPart IINotes on Utility and CostPart OnePart TwoSuggestions for the Reconstruction of Cost TheoryIndex