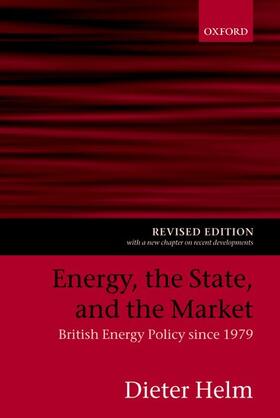 Helm Energy, the State, and the Market

Helm Energy, the State, and the Market

The transformation of Britain's energy policy in the last two decades has been more radical than any such change in developed economies. Since 1979 the great state energy monopolies created after the Second World War have been privatised and made subject to competition. Images of Arthur Scargill and the miners' strike of the 1980s remain vivid, but what effect has the new market philosophy had on Britain's energy industries?

Since 1979 the National Coal Board, British Gas, and the Central Electricity Generating Board have all been broken up. Energy trading, electricity pools, auctions, and futures markets first developed, but they failed to solve the old energy policy problems of security of supply and network integrity, and the new ones of the environment and reliance on gas. The government introduced a new regulatory regime as a temporary necessity but regulation did not wither away, rather it grew to be more
pervasive. Changing the ownership of the industries did not reduce the government's involvement, it simply changed its form.

The 1980s and 1990s were years of energy surpluses and low fossil-fuel prices. There was little need to invest, and much of the investment in the so-called dash for gas was artificially stimulated. The new owners sweated the assets, and engaged in major financial engineering. Takeovers consolidated the industry into a smaller number of dominant firms. As investment priorities became more urgent, with the environmental pressures of climate change and the gradual switch to imported gas, the
market philosophy was found wanting. Energy policy could not rely solely on the market. And it is the government which finds itself responsible for resolving the core issues of energy policy.

Helm's book tells this story. It is a major study of the new market approach to energy policy in Britain since 1979. It describes the miners' strike, the privatisations of the gas, electricity, nuclear generation, and coal industries, and looks at events such as the dash for gas, regulatory failures in setting monopoly prices, and the takeovers and the consolidations of the late 1990s. Helm sets out the achievements of the new market philosophy, but also analyses why it has ultimately failed to
turn energy industries into normal commodity businesses.

The revised paperback edition includes a new chapter on the White Paper on a low-carbon economy and updated discussions on nuclear power, to incorporate the 2003 Nuclear White Paper, price reviews, and emissions trading.

Helm, Dieter
Dieter Helm is Official Fellow in Economics at New College, Oxford. He has been a member of the Department of Trade and Industry's Energy Advisory Panel since 1993 and is also Chairman of the Academic Panel of the Department for Environment, Food and Rural Affairs. He is a director of Oxford Economic Research Associates Ltd (OXERA) and has advised governments, regulators, and major companies in the UK and internationally.