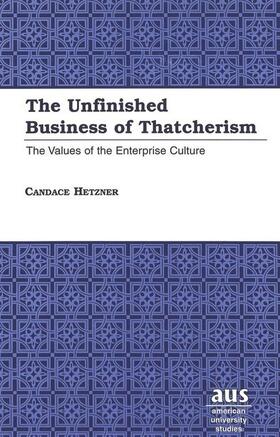 Hetzner The Unfinished Business of Thatcherism

The Values of the Enterprise Culture

Hetzner The Unfinished Business of Thatcherism

The Unfinished Business of Thatcherism: The Values of the Enterprise Culture is a book about the impact of cultural values on economic performance. Using survey research, interviews, journalistic accounts, novels, and historical data, this book examines the extent to which Thatcherism succeeded in transforming British values in directions supportive of a robust, modern capitalist economy. The author argues that Thatcherism accomplished more with respect to enhancing support for capitalist values, such as profit-making and private ownership, than for values of modernization such as technical expertise and the Protestant ethic. Ultimately, the author contends that Thatcherism failed at its cultural revolution because it did not provide a liberal political ideology to buttress its liberal economic ideology.

Hetzner, Candace
The Author: Candace Hetzner is a political scientist who has written widely on value issues in public policy and administration in Great Britain and the United States. Professor Hetzner has been a faculty member at Rutgers University, Fordham University, and the University of Massachusetts. She is presently Professor of Management and Director of the M.S. in Management Program at Lesley College in Cambridge, Massachusetts.