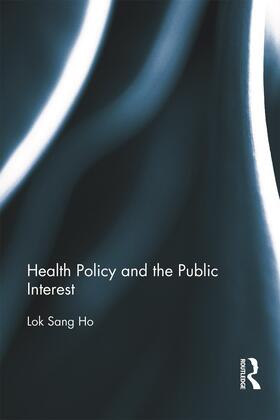 This book is written with an acute awareness of the need for new insight to ensure (1) universal protection in basic healthcare; (2) providing choice; (3) efficient production and consumption of healthcare services; (4) financial sustainability of the healthcare system. Defining the public interest as the welfare of the "representative individual" with no vested interest who imagines himself to have equal chance of being anyone in society, this book explores alternative ways of finance and delivery, the optimal interface between the public healthcare sector and the private healthcare sector, and that between public insurance and private insurance.

The book includesa theoretical but non-technical section that distinguishes between the stock of health and functional health, proposes a utility maximizing/behavioural framework to explain behaviour and the role of health policy andinvestigates the nature of risk and alternative insurance mechanisms.The book illustrates with anumber of country studies, covering a large range of healthcare systems from the American and the European systems to various Asian systems as well as those of Australia and New Zealand. The survey of country experiences reinforces the theoretical conclusions about the role of the public healthcare sector and social insurance and that of the private market.

The book highlights the importance of and the workability of "pricing right" and "capping right": pricing standard or basic healthcare services at the right price can contain both demand-side and supply-side moral hazard and lead to more efficient production and consumption of healthcare services; capping annual eligible healthcare expenses will provide effective protection against financial risks. The proposal of lifetime healthcare supplement offers greater choice. Private caregivers and insurers supplement the public healthcare system by offering more choices and premium services, as well as additional protection.

Ho, Lok-sang (Lingnan University, Hong Kong)
Lok-sang Ho, Professor of Economics and Director of the Centre for Public Policy Studies, Lingnan University, is the author of Principles of Public Policy Practice and Health Care Financing and Delivery: A Model for Reform, and has published about 90 academic papers in journals and book chapters. Prof. Ho has been active in community and professional service. He served as President of the HK Economic Association for eight years through 2007. He has been a member of the Standing Commission on Civil Service Salaries and Conditions of Service since 2006. He had also served as an Advisor for the Hong Kong Institute of Monetary Research, a member of HK Committee of the Pacific Economic Cooperation Council, and part time member of the Central Policy Unit of the Hong Kong SAR Government. Before his appointment at Lingnan University in 1995 he was Senior Lecturer at the Chinese University of Hong Kong, which he joined in 1983 following a career in the Ontario Government and the Ontario Economic Council as Economist and Research Officer. He holds a Ph.D from the University of Toronto and is a graduate of the University of Hong Kong. He writes a weekly column in China Daily, HK edition, occasional columns in SCMP, Oriental Daily, among others, and contributes to Seeking Alpha on international economic affairs as an author.