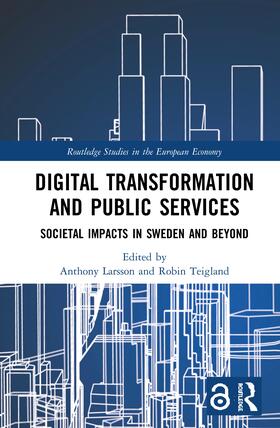 Societal Impacts in Sweden and Beyond

Through a series of studies, the overarching aim of this book is to investigate if and how the digitalization/digital transformation process affects various welfare services provided by the public sector, and the ensuing implications thereof. Ultimately, this book seeks to understand if it is conceivable for digital advancement to result in the creation of private/non-governmental alternatives to welfare services, possibly in a manner that transcends national boundaries. This study also investigates the possible ramifications of technological development for the public sector and the Western welfare society at large.

This book takes its point of departure from the 2016 Organization for Economic Co-operation and Development (OECD)report that targets specific public service areas in which government needs to adopt new strategies not to fall behind. Specifically, this report emphasizes the focus on digitalization of health care/social care, education, and protection services, including the use of assistive technologies referred to as "digital welfare." Hence, this book explores the factors potentially leading to whether state actors could be overrun by other non-governmental actors, disrupting the current status quo of welfare services.

The book seeks to provide an innovative, enriching, and controversial take on society at large and how various aspects of the public sector can be, and are, affected by the ongoing digitalization process in a way that is not covered by extant literature on the market. This book takes its point of departure in Sweden given the fact that Sweden is one of the most digitalized countries in Europe, according to the Digital Economy and Society Index (DESI), making it a pertinent research case. However, as digitalization transcends national borders, large parts of the subject matter take on an international angle. This includes cases from several other countries around Europe as well as the United States.

Larsson, Anthony
Anthony Larsson (Ph.D.) is a researcher at the Stockholm School of Economics Institute for Research (SIR), Sweden. He holds a Ph.D. from Karolinska Institutet, Sweden. He also holds anMBA and M.Sc. degrees in political science, social anthropology, and business administrationand economics respectively, as well as an associate degree in psychology.

Robin Teigland (Ph.D.) is Professor of Management of Digitalization in the Entrepreneurship and Strategy Division at the Department of Technology Management and Economics at Chalmers University of Technology, Gothenburg, Sweden. She is also Professor of Business Administration with a specialization in strategic information systems management at the Stockholm School of Economics in Sweden and a member of the Royal Swedish Academy of Engineering Sciences.