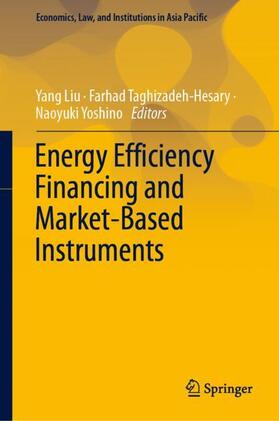 This book is devoted to investigating the policy design and effectiveness of financial and market-based instruments to promote energy efficiency financing. The concept of this monograph is to present the latest results related to energy efficiency funding schemes, energy efficiency obligations, voluntary agreements, auction mechanisms, and Super Energy Services Companies (Super ESCOs) in major jurisdictions across the world. The book focuses on financial and market-based instruments as they deliver a price signal, which provides an incentive for firms to invest in innovation or implement more energy-efficient technologies and deliver energy savings while minimizing costs. Such instruments can have significant advantages for the government, supporting the fiscal sustainability of the government’s energy efficiency efforts, requiring less enforcement than regulation and according the market flexibility to select the most cost-efficient technologies. This book is highly recommended to researchers, policy experts, and business specialists who seek an in-depth and up-to-date integrated overview of energy efficiency financing.

Liu, Yang
Yang Liu is a principal economist with the African Development Bank. He has over 15 years' global experience with energy utilities, market regulators, and academia in developed and developing countries. He plays a leadership role in strategic research projects on energy policies and their national, regional, and global implications, including integrating renewable energy and energy efficiency, infrastructure financing, energy access, and electricity market design in major Asian and African emerging economies. He assesses additionality and development outcomes of the private sector operations to inform the decision making of the African Development Bank's senior management. His work has been widely published in peer-reviewed journals and has revolved around policy-oriented topics relevant to emerging economies' long-term development. He holds a PhD in economics from Ecole Polytechnique, France. He speaks English, French, and Mandarin.
Farhad Taghizadeh-Hesary is an associate professor of economics at Tokai University in Japan and a visiting professor at Keio University in Tokyo, Japan. He is a grantee of the Excellent Young Researcher status from the Ministry of Education of Japan. He taught as an assistant professor at Keio University and Waseda University, Tokyo, Japan. He is currently serving as editor of Cognet Business & Management and associate editor/board member of several prestigious journals including Energy Efficiency, Singapore Economic Review, Global Finance Journal, and Frontiers in Energy Research. He has guest-edited special issues for journals including Energy Policy, Energy Economics, and Journal of Environmental Management. His research credits include authoring more than 120 academic journal papers and book chapters and editing 10 books published by publishers including Springer, Routledge, and World Scientific. He holds a PhD in economics from Keio University with a scholarship from the government of Japan.
Naoyuki Yoshino is professor emeritus of Keio University in Tokyo, Japan, and director of the Financial Research Center (FSA Institute, Government of Japan). He obtained a PhD from Johns Hopkins University in 1979, where his thesis supervisor was Sir Alan Walters (United Kingdom's Prime Minister Margaret Thatcher's economic adviser). He worked as assistant professor at the State University of New York at Buffalo, visiting scholar at Massachusetts Institute of Technology,  (United States), visiting scholar at the Central Bank of Japan, and visiting professor at the University of New South Wales (Australia) and Fondation Nationale des Sciences Politiques (France). He received honorary doctorates from the University of Gothenburg (Sweden) and Martin Luther University of Halle-Wittenberg (Germany). He was also conferred with the Fukuzawa award from Keio University for his contribution to research. He was the Dean and CEO of the Asian Development Bank Institute in Tokyo (2014-2020).