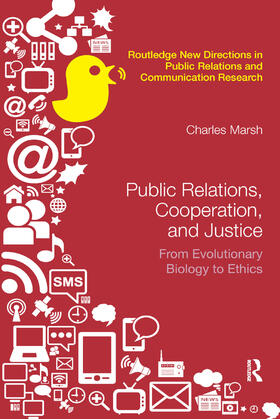 From Evolutionary Biology to Ethics

Modern approaches to public relations cluster into three camps along a continuum: conflict-oriented egoism, e.g. forms of contingency theory that focus almost exclusively on the wellbeing of an entity; redressed egoism, e.g. subsidies to redress PR’s egoistic nature; and forms of self-interested cooperation, e.g. fully functioning society theory. Public Relations, Cooperation, and Justice draws upon interdisciplinary research from evolutionary biology, philosophy, and rhetoric to establish that relationships built on cooperation and justice are more productive than those built on conflict and egoistic competition. Just as important, this innovative book shuns normative, utopian appeals, offering instead only empirical, materialistic evidence for its conclusions.This is apowerful, multidisciplinary, and well-documented analysis, including specific strategies for the enactment of PR as a quest for cooperation and justice, whichaligns the discipline of public relations with basic human nature. It will be of interest to scholars and advanced students of public relations and communication ethics.

Marsh, Charles, PhD.
Charles Marsh is the Oscar Stauffer Professor of Journalism and Mass Communications at the University of Kansas, USA. He is author of Classical Rhetoric and Modern Public Relations: An Isocratean Model (Routledge) and co-author of Public Relations: A Values-Driven Approach (Pearson) and Strategic Writing (Routledge).