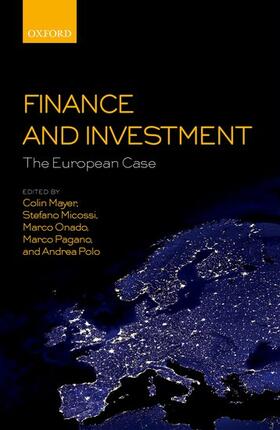 Low growth, low investment, insufficient spend on infrastructure, weak bank lending to the corporate sector, and funding deficiencies of small and medium-sized enterprises are all causes of concern in Europe. To many, they point to fundamental problems in the financing of European companies and in Europe's financial systems. Are these concerns valid and do the structure and performance of the financial system lie at their heart? If so, what should be done to
address them, and have the right policy prescriptions been identified to date?

A product of the Restarting European Investment Finance research programme, Finance and Investment: The European Case brings together leading researchers to consider the causes of the persistently low level of investment in Europe. It examines the extent to which the financial system is a contributory factor and identifies possible remedies, considering the relation of finance to corporate sector investment, the lending behaviour of banks, the provision of equity financing, and the
role of public sector institutions, regulation, and taxation.

Finance and Investment provides one of the most comprehensive and thorough analyses of any financial system undertaken to date. It reflects a large body of research using new and existing data sets, employing advanced empirical tools, and exploiting the unique insights provided by the tumultuous events of financial and sovereign debt crises. Together, they comprise an exceptional body of knowledge to advance academic thinking and guide policy formulation.

Pagano, Marco
Colin Mayer is the Peter Moores Professor of Management Studies at the Saïd Business School at the University of Oxford. He is a Professorial Fellow and Sub-Warden of Wadham College, Oxford and an Honorary Fellow of Oriel College, Oxford and St Anne's College, Oxford. He was appointed Commander of the Order of the British Empire (CBE) for services to business education and the administration of justice in the economic sphere in the 2017 New Years Honours.
Colin Mayer was the first professor at the Saïd Business School, and the first Director of the Oxford Financial Research Centre. He was also previously the Peter Moores Dean of the Business School. He was a Harkness Fellow at Harvard University, a Houblon-Norman Fellow at the BanBank of England, the first Leo Goldschmidt Visiting Professor of Corporate Governance at the Solvay Business School, Université de Bruxelles, and has had visiting positions at Columbia, MIT and Stanford
universities.

Stefano Micossi is Director General of Assonime, a private business association and think tank active on issues of corporate law and taxation, competition policy, and regulatory affairs. In 2016 he was appointed Honorary Professor of the College of Europe, where he has taught monetary and banking union and internal market matters for over 20 years. He Chairs the LUISS School of European Political Economy and the Scientific Advisory Committee of Confindustria.
Stefano Micossi is also Member of the Board of Directors of Cassa Depositi e Prestiti, the Centre for European Policy Studies (CEPS), European Issuers (the European Association of Listed Companies), the Institute for International Affairs (IAI) and the International Yehudi Menuhin Foundation.

Marco Onado is a Senior Professor at Bocconi University. He was formerly Full Professor of Banking at Modena and then Bologna Universities, Commisssioner of CONSOB, and a columnist for Il Sole-24 Ore. Marco Onado is a memberr of the Scientific Committee of Prometaia, Bologna, a leading research centre for economic forecasts, and a Trustee of the IASB Foundation. He is the author of many publications on banking and financial systems, most recently A Long-Term Approach to Italian Banks'
Profitability, and Paradise lost? (with Giuseppe Lusignani) in the Journal of Financial Perspectives

Marco Pagano holds a B.A. in Economics from Cambridge University and a Ph.D. in Economics from MIT. He is Professor of Finance at University of Naples Federico II, where he directs the Centre for Studies in Economics and Finance (CSEF), and is the President of the Einaudi Institute for Economics and Finance (EIEF), Rome. From 2004 to 2011 he was Managing Editor of the Review of Finance. Currently he co-chairs the Advisory Scientific Committee of the European Systemic Risk Board (ESRB).
His research focuses on banking, corporate finance and market microstructure, and in 2011 he received an ERC Advanced Grant.

Andrea Polo is an Assistant Professor of Finance at Universitat Pompeu Fabra, an Affiliated Professor at the Barcelona GSE, and a CEPR Research Affiliate. He has been an AXA Research Fellow, and a fellow at the Rock Center for Corporate Governance at Stanford University, at the Saïd Business School at Oxford University, and at the Oxford Institute for Global Economic Development. His research interests are in corporate finance, banking and governance. His work has been published in the
Review of Financial Studies, the Journal of Financial Economics and the Journal of Financial and Quantitative Analysis.