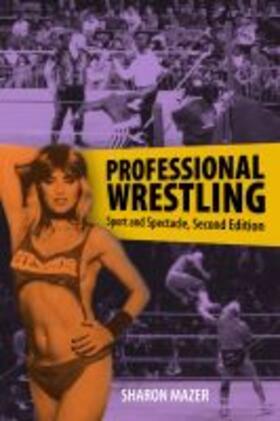 Professional wrestling is one of the most popular performance practices in the United States and around the world, drawing millions of spectators to live events and televised broadcasts. The displays of violence, simulated and actual, may be the obvious appeal, but that is just the beginning. Fans debate performance choices with as much energy as they argue about their favorite wrestlers. The ongoing scenarios and presentations of manly and not-so-manly characters—from the flamboyantly feminine to the hypermasculine—simultaneously celebrate and critique, parody and affirm the American dream and the masculine ideal. Sharon Mazer looks at the world of professional wrestling from a fan’s-eye-view high in the stands and from ringside in the wrestlers’ gym. She investigates how performances are constructed and sold to spectators, both on a local level and in the "big leagues" of the WWF/E. She shares a close-up view of a group of wrestlers as they work out, get their faces pushed to the mat as part of their initiation into the fraternity of the ring, and dream of stardom. In later chapters, Mazer explores professional wrestling’s carnivalesque presentation of masculinities ranging from the cute to the brute, as well as the way in which the performances of women wrestlers often enter into the realm of pornographic. Finally, she explores the question of the "real" and the "fake" as the fans themselves confront it. First published in 1998, this new edition of Professional Wrestling: Sport and Spectacle both preserves the original’s snapshot of the wrestling scene of the 1980s and 1990s and features an up-to-date perspective on the current state of play.

Mazer, Sharon
Sharon Mazer is associate professor of theatre and performance studies in Te Ara Poutama, the Faculty of Maori and Indigenous Development at Auckland University of Technology. She is author of I Have Loved Me a Man: The Life and Times of Mika and editor of The Intricate Art of Actually Caring, and Other New Zealand Plays.