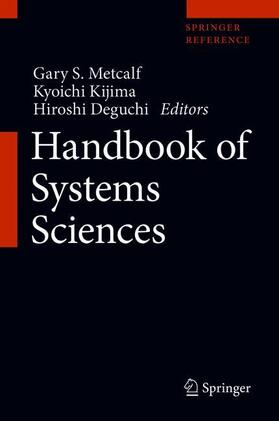 The chapters in the handbook present definitive discussions of systems sciences from a wide array of perspectives. The needs of practitioners in industry and government as well as students aspiring to careers in systems sciences provide the motivation for the majority of the chapters. The handbook begins with a comprehensive introduction to the coverage that follows. It provides not only an introduction to systems sciences but also a brief overview and integration of the succeeding chapters in terms of a knowledge map. The introduction is intended to be used as a field guide that indicates why, when, and how to use the materials or topics contained in the handbook.

Metcalf, Gary S.
Gary S. Metcalf is a systems theorist and practitioner. He has worked as a family therapist, and as a manager in large corporations. He taught at universities in the USA, Finland, and India for 20 years. He served as president and vice president of the International Federation for Systems Research from 2002 to 2018, and as president of the International Society for the Systems Sciences in 2008. He has consulted with international corporations, small non-profit organizations, and with the US government. His research and writing have spanned topics from social systems design to service science to leadership. His most recent interests include the social, economic, and political impacts of climate change

Kyoichi Kijima is professor emeritus, Tokyo Institute of Technology; specially appointed professor, Daito Bunka University; and adjunct professor in the School of Business Management, Bandung Institute of Technology, Indonesia. He also holds appointment at The Open University of Japan. Prof. Kijima has been a member of the International Society for the Systems Sciences (ISSS) since 1980, where he served as president of the Society in 2007. He also served as vice president of International Society for Knowledge and Systems Sciences (ISKSS) and of the International Federation of Systems Research (IFSR). He is a member of the International Academy of Systems and Cybernetic Science (IASCS) and of World Organization of Systems and Cybernetics (WOSC). Prof. Kijima worked as president of the Japan Society for Management Information (JASMIN) from 2016 to 2019. Since 2013, he has worked as editorxv in-chief of the Translational Systems Sciences book series published by Springer. He began his academic career with researches on the mathematical general systems theory. His current interests are in a wide spectrum of systems science from decision systems science to service systems science to soft systems approach

Hiroshi Deguchi was born in 1955 in Tokyo, Japan. He received his M.S. and Ph.D. in systems sciences from the Tokyo Institute of Technology, Japan, in 1983 and 1986, respectively, and a Ph.D. in economics from Kyoto University. His academic positions include: assistant professor, Fukushima University, 1987–1989; associate professor, International University of Japan, 1989–1995; associate professor, Chuo University, 1995–1996; associate professor, Kyoto University, 1996–2001; and professor, Tokyo Institute of Technology, 2001–present. Since 2017, he has been the president of the Japan Association for Social and Economic Systems Studies (JASESS). He is a board member of the Japan Association for Philosophy of Science (JAPS), the International Association of Project and Program Management (IAP2M), the Japan Society for Evolutionary Economics, and the Japan Association of Simulation and Gaming (JASAG), the last of which he was the president from 2013 to 2017. He serves as the co-editor-in-chief of the Springer series Translational Systems Sciences (http://www.springer.com/series/ 11213).