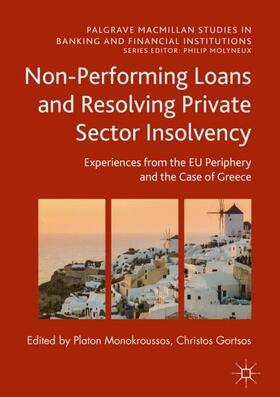 Experiences from the EU Periphery and the Case of Greece

This book explores the issue of private sector over-indebtedness following the recent financial crisis. It addresses the various challenges for policymakers, investors and economic agents affected by applied remedial policies as the private non-financial sector in Europe continues to face increased challenges in servicing its debt, with the problem mainly concentrated in several countries in the EU periphery and Eastern Europe. Chapters from expert contributors address reduced investment as firms concentrate on deleveraging and repairing their balance sheets, curtailed consumer spending, depressed collateral values and weak credit creation. They examine effective policies to facilitate private sector debt restructuring which may involve significant upfront costs in terms of time to implement and committed budgetary resources, as well as necessary reforms required to improve the broader institutional framework and judicial capacity. The book also explores the issue of over indebtedness in the household sector, contributing to the literature in establishing best practice principles for household debt.

Monokroussos, Platon
Platon Monokroussos is Group Chief Economist and Deputy General Manager of Eurobank Ergasias S.A. He is a Senior Visiting Fellow at the Hellenic Observatory of the London School of Economics and Political Science. He is Chairman of the Scientific Council of the Hellenic Bank Association and its representative to the Chief Economists' Group (CEG) of the European Banking Federation. Before joining Eurobank, he held high-level positions in leading financial institutions, including ABN AMRO and Bank of America. Dr Monokroussos has written extensively on contemporary macroeconomic and financial issues and is co-editor of the book "A Financial Crisis Manual: Reflections and the Road Ahead" (Palgrave). In recent years, his team has repeatedly been included in the Reuters top-10 list of most accurate global forecasters of major exchange rates. Christos V. Gortsos is Professor of International Economic Law at the Panteion University of Athens, Greece. In addition, he has multiple standing teaching assignments across leading institutions such as the Law School of the National and Kapodistrian University of Athens in Greece, the Faculty of Law at Izmir University of Economics in Turkey, the European Institute at Zurich University in Switzerland and the European Institute at Saarland University in Germany. His main fields of teaching are financial regulation, international and EU monetary and financial Law, Greek administrative financial law, general EU law, international trade law, as well as economic analysis of law.