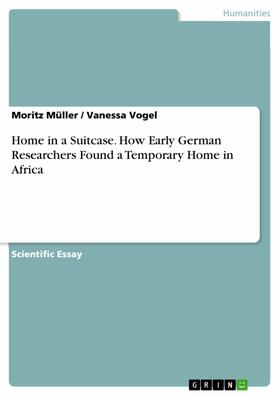 Müller / Vogel Home in a Suitcase. How Early German Researchers Found a Temporary Home in Africa

Müller / Vogel Home in a Suitcase. How Early German Researchers Found a Temporary Home in Africa

Scientific Essay from the year 2020 in the subject Ethnology / Cultural Anthropology, University of Frankfurt (Main) (Institut für Ethnologie), language: English, abstract: In our text, we want to show, how the early German ethnologists and their companions used music, literature, and food to feel safe and home.

Leo Frobenius (1873–1938) is a well-known German ethnologist and until today famous for his extravagant expeditions to the African continent. When he and his colleagues departed for their journeys, they on the one hand satisfied their thirst for adventure, but on the other hand missed their homes and families. So the researchers—among them scientists as well as artists—took a part of their home with them in their suitcases.

While Frobenius and his colleagues took mementos of their home to Africa, they also brought memories of Africa to Europa—in form of photographs, drawings, recordings and material culture. These objects depict (con)temporary visions of a home far away from home.