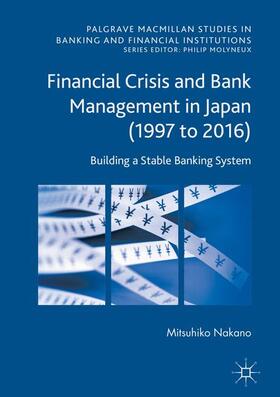 Nakano Financial Crisis and Bank Management in Japan (1997 to 2016)

Nakano Financial Crisis and Bank Management in Japan (1997 to 2016)

This book explores the challenges faced by the Japanese economy and the Japanese banking industry following the financial crisis that emerged around the turn of the last millennium. The author explores how the Japanese financial crisis of the late 1990s engendered huge restructuring efforts in the banking industry, which eventually led to even more sweeping changes of the economic system and long-term deflation in the 2000s. The discussion begins with an overview of the unconventional monetary policy launched by the Bank of Japan at this time, while banking administrative policies maintained their strict code of governance. The author describes how, just as recovery seemed possible, the twin disasters of the Lehman shock and the Great East Japan Earthquake buffeted the recovering economy, and pushed Japan again into deflation. The book also looks to the very recent past, with the sudden advent of Abenomics in 2013, with its three-pronged approach, which was intended to break the deflationary mindset. Finally, the author projects what the future of the banking industry in Japan might encompass, as looming demographic changes gradually threaten both the economy and the banking industry.

Chapter 1) Financial Crisis and Banking Crisis in Japan / 1997-2003.- Chapter 2) Change in banking supervision policy and their effects on bank behaviour / 2002-2005.- Chapter 3) The Lehman Shock and its Influence on Banking Supervision Policy /2008-2013.- Chapter 4) The Launch of Abenomics and its effects on the banking business.- Chapter 5) The future of banking management in Japan.- Chapter 6) Conclusion.

Nakano, Mitsuhiko
Mitsuhiko Nakano is a Professor at St. Andrew's University in Japan. His research interests focus specifically on the themes of banking and business systems, banking management, and financial administration policy. Having worked at a major bank during the period of time covered in this book, he uses his own extensive practical experience to analyse the economic effects of banking.