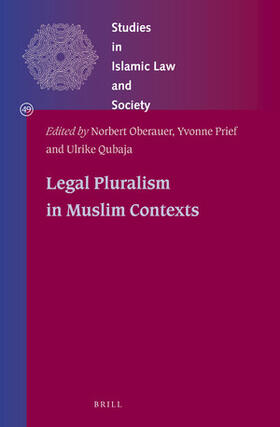 Approaches to legal pluralism vary widely across the spectrum of different disciplines. They comprise normative and descriptive perspectives, focus both on legal pluralist realities as well as public debates, and address legal pluralism in a range of different societies with varying political, institutional and historical conditions.

Emphasising an empirical research to contemporary legal pluralist settings in Muslim contexts, the present collected volume contributes to a deepened understanding of legal pluralist issues and realities through comparative examination. This approach reveals some common features, such as the relevance of Islamic law in power struggles and in the construction of (state or national) identities, strategies of coping with coexisting sets of legal norms by the respective agents, or public debates about the risks induced by the recognition of religious institutions in migrant societies. At the same time, the studies contained in this volume reveal that legal pluralist settings often reflect very specific historical and social constellations, which demands caution towards any generalisation.

Muslims of Greece: a Legal Paradox and a Political Failure

Islamic Law as Indigenous Law: Shari¯'a Courts in Israel from a Postcolonial Perspective

Legal Pluralism in the Southern West Bank: the Impact of Honour as a Factor on Developments towards an Increased Consideration of Rule-of-Law Principles in Clan-based Justice

Oberauer, Norbert
Norbert Oberauer is Professor at the Institute of Arabic and Islamic Studies at the University of Münster. His main areas of research include Islamic contract law, islamic legal history and legal hermeneutics (usul al-fiqh).

Ulrike Qubaja, M.A., is social counsellor and teacher of Social Work at AWO Hamburg e.V. She is writing a PhD dissertation on clan-based customary law in the southern Palestinian Westbank and was a Junior Researcher at the University of Münster from 2013 to 2017.

Yvonne Prief, M.A., is academic researcher at the Higher Administrative Court for the State of North Rhine-Westphalia. She holds a degree in Islamic Studies, Public Law and Political Science and is writing a PhD on Muslim legal practice in the United Kingdom.