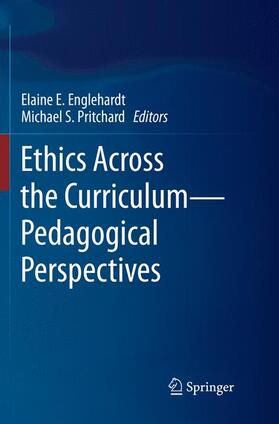 This book features articles by more than twenty experienced teachers of ethics who are committed to the idea that ethics can and should be taught virtually anywhere in the education curriculum. They explore a variety of ways in which this might best be done.

Traditionally confined largely to programs in philosophy and religion, the teaching of ethics has in recent decades spread across the curriculum education. The contributors to this book discuss the rationale for supporting such efforts, the variety of challenges these efforts face, and the sorts of benefits faculty and students who participate in ethics across the curriculum endeavors can expect.

An overriding theme of this book is that the teaching of ethics should not be restricted to one or two courses in philosophy or religion programs, but rather be addressed wherever relevant anywhere in the curriculum. For example, accredited engineering programs are expected to ensure that their students are introduced to the ethical dimensions of engineering. This can involve consideration of ethical issues within particular areas of engineering (e.g., civil, mechanical, electrical, chemical) as distinctive segments of certain courses (e.g., those that focus on design problems), or as a full semester course in ethics in engineering. Similar approaches can be taken in nursing, medicine, law, social work, psychology, accountancy, management, and so on. That is, some emphasis on ethics can be expected to be found in broad range of academic disciplines.

However, many ethical issues require careful attention from the perspectives of several disciplines at once, and in ways that require their joining hands. Recognizing that adequately addressing many ethical issues may require the inclusion of perspectives from a variety of disciplines makes apparent the need for effective communication and reflection across disciplines, not simply within them. This, in turn, suggests that faculty and their students can benefit from special programs that are designed to include participants from a variety of disciplines. Such programs will be a central feature of this book. Although some differences might arise in how such issues might best be discussed across different parts of the curriculum, these discussions might be joined in ways that help students, faculty, administrators, and the wider public better appreciate their shared ethical ground.

Englehardt, Elaine E.
Elaine E.Englehardt is a Distinguished Professor of Ethics and Professor of Philosophy at Utah Valley University (UVU). She has written and directed seven multi-year, national grants in the area of Ethics and Ethics Across the curriculum. One grant founded Ethics Across the Curriculum at UVU and another funded the Society for Ethics Across the Curriculum and the journal Teaching Ethics. She is a SEAC board member and with Michael Pritchard was co-author of the journal Teaching Ethics. She has authored eight text books: Taking Sides: Clashing Views in Business, Ethics and Society, with Lisa Newton and Michael Pritchard up to 13th Edition, NY: McGraw Hill, 2013. Engineering Ethics: Concepts and Cases with CE Harris, ay James and Michael Pritchard. NY: Wadsworth, 2013. Obstacles to Ethical Decision-Making: Mental Models, Milgram and the Problem of Obedience with Patricia Werhane, Michael Pritchard, Laura Hartman and Crina Archer. London: Cambridge University Press, 2013. Ethics in Higher Education Administration with Michael Pritchard, Kerry Romesburg and Brian Schrag, Netherlands: Springer Publishers, 2010. Ethics and Life: An Interdisciplinary Look at the Humanities, fourth edition, with Donald Schmeltekopf, New York: McGraw-Hill, 2010. Media Ethics for a Principled Society, with Ralph Barney, Wadsworth, 2002. Interpersonal Communication Ethics: Friends, Intimates, Sexuality, Marriage and Family, Harcourt Brace, 2001.The Organizational Self and Ethical Conduct: Sunlit Virtue and Shadowed Resistance, with James A. Anderson, Harcourt Brace, 2002. She has written numerous peer reviewed articles and ten book chapters. She has served in various administrative positions. Her PhD is from the University of Utah.
Michael S. Pritchard is the Willard A. Brown Professor of Philosophy and Co-Director of the Center for the Study of Ethics in Society at Western Michigan University. He received his Ph.D. in Philosophy from the University of Wisconsin. He received his B.A. from Alma College (Michigan). He teaches courses in Ethical Theory, Practical Ethics, Professional Ethics, 18th Century British Philosophy, and Philosophy for Children. For seven years he served as co-editor, with Elaine Englehardt of Teaching Ethics, the official journal of the Society for Ethics Across the Curriculum. He is a founding board member for SEAC. Among his publications are: On Becoming Responsible (Kansas, 1991); Communication Ethics (Wadsworth, 1994), with James Jaksa; Reasonable Children (Kansas, 1996); Professional Integrity (Kansas, 2007); Ethical Challenges of Academic Administration (Springer, 2010), edited with Elaine Englehardt, Kerry Romesburg, and Brian Scrag; Taking Sides: Business Ethics, 11th edition (McGraw-Hill, 2011), edited with Lisa Newton and Elaine Englehardt; Engineering Ethics (Wadsworth,5th edition forthcoming in 2013), with C.E. Harris, Elaine Englehardt, and Ray James; and Obstacles to Ethical Decision-Making (Cambridge 2013), with Patricia Werhane, Laura Hartman, Crina Archer, and Elaine Englehardt. He is the author and director of several National Science Foundation and National Endowment for the Humanities grants in various areas of ethics including research ethics.