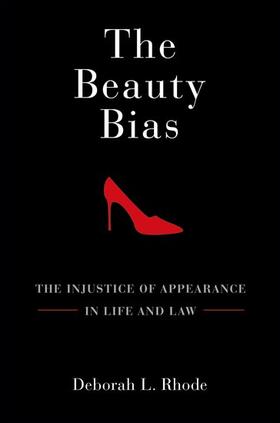 The Injustice of Appearance in Life and Law

"It hurts to be beautiful" has been a cliche for centuries. What has been far less appreciated is how much it hurts not to be beautiful. The Beauty Bias explores our cultural preoccupation with attractiveness, the costs it imposes, and the responses it demands.

Beauty may be only skin deep, but the damages associated with its absence go much deeper. Unattractive individuals are less likely to be hired and promoted, and are assumed less likely to have desirable traits, such as goodness, kindness, and honesty. Three quarters of women consider appearance important to their self image and over a third rank it as the most important factor.

Although appearance can be a significant source of pleasure, its price can also be excessive, not only in time and money, but also in physical and psychological health. Our annual global investment in appearance totals close to $200 billion. Many individuals experience stigma, discrimination, and related difficulties, such as eating disorders, depression, and risky dieting and cosmetic procedures. Women bear a vastly disproportionate share of these costs, in part because they face standards
more exacting than those for men, and pay greater penalties for falling short.

The Beauty Bias explores the social, biological, market, and media forces that have contributed to appearance-related problems, as well as feminism's difficulties in confronting them. The book also reviews why it matters. Appearance-related bias infringes fundamental rights, compromises merit principles, reinforces debilitating stereotypes, and compounds the disadvantages of race, class, and gender. Yet only one state and a half dozen localities explicitly prohibit such discrimination. The
Beauty Bias provides the first systematic survey of how appearance laws work in practice, and a compelling argument for extending their reach. The book offers case histories of invidious discrimination and a plausible legal and political strategy for addressing them. Our prejudices run deep, but we can
do far more to promote realistic and healthy images of attractiveness, and to reduce the price of their pursuit.

Rhode, Deborah L.
Deborah L. Rhode is the Ernest W. McFarland Professor of Law and the Director of the Center on the Legal Profession at Stanford University. She has a Yale BA and JD, and is a former law clerk of Justice Thurgood Marshall, a former president of the Association of American Law Schools, a former chair of the American Bar Association's Commission on Women in the Profession, and a former director of both Stanford's Center on Ethics and its Institute for Research on Women
and Gender. She is the author or coauthor of twenty books, including In the Interests of Justice (OUP 2003), Access to Justice (OUP 2004), and Ethics in Practice (OUP 2003), and over 200 articles, and is the nation's most cited scholar on professional responsibility.