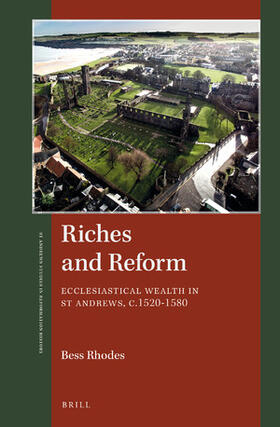 The Scottish Reformation is often presumed to have had little economic impact. Traditionally, scholars maintained that Scotland’s late medieval church gradually secularised its estates, and that the religious changes of 1560 barely disrupted an ongoing trend. In Riches and Reform Bess Rhodes challenges this assumption with a study of church finance in Scotland’s religious capital of St Andrews, a place once regarded as the ‘cheif and mother citie of the Realme’. Drawing on largely unpublished charters, rentals, and account books, Riches and Reform argues that in St Andrews the Reformation triggered a rapid, large-scale, and ultimately ruinous redistribution of ecclesiastical wealth. Communal assets built up over generations were suddenly dispersed through a combination of official policies, individual opportunism, and a crisis in local administration, leading the post-Reformation churches and city of St Andrews into ‘poverte and decay’.

Plan of St Andrews in the Sixteenth Century