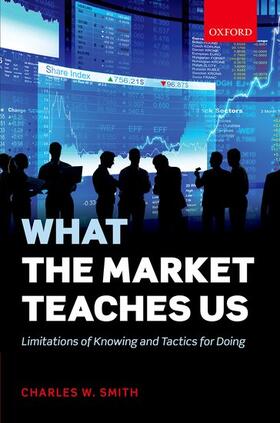 Smith What the Market Teaches Us: Limitations of Knowing and Tactics for Doing

Smith What the Market Teaches Us: Limitations of Knowing and Tactics for Doing

Rather than attempting to explain and predict how 'the Market' functions - a futile endeavor - this book focuses upon the rich teachings that the market offers us for dealing with ambiguities and unexpected and contradictory happenings. These teachings are not intended to master the market, but to sensitize us to the various types of uncertainty that the market and life in general present.

Drawing upon years of 'participant-observation' research the book explores the ways people have traditionally tried to 'make sense' out of the inconsistencies and general 'fickleness' of the market. The various market narratives generated by these efforts normally function only to deny the inconsistencies confronted not resolve them. Various market routines are similarly explored and shown only to insulate participants from these market inconsistencies and related unexpected happenings. While
both coping practices commonly serve to calm us by denying and insulating us from these uncertainties, they seldom if ever actually resolve them.

Fortunately, the market suggests another, less acknowledged coping practice, namely 'acting sensibly.' In this shift from 'knowing' to 'doing,' the book explores practices employed in wrestling with the underlying causal forces that generate the bulk of unexpected happenings. This is followed by a closer look at some of the new teachings of the present-day, modern, global market with its numerous new trading instruments, algorithmic trading programs, high frequency trading, and Big Data. This
new market is shown to be a hybrid of making sense and acting sensibly as it employs both narratives/accounts and concrete trading transactions. The final chapter uses the market to suggest how we might best learn to cope with these newer types of uncertainties rather than futilely trying to master
them. While all of these teachings are presented primarily in the context of the market, they apply equally to a wide range of other social sectors, most of which have themselves become shaped in various degrees by today's market.

Smith, Charles W.
Charles W. Smith is Professor Emeritus of the Sociology at Queens College and the Graduate Schools of CUNY, has spent the last fifty years studying, including active participation, all types of price-setting markets. He is the author of many books and articles including The Mind of the Market: A Study of Stock Market Philosophies, Their Uses and Implications (Rowman and Littlefield: 1981), Auctions: The Social Construction of Value (Free Press/U of California Press: