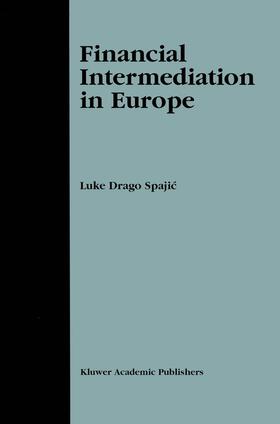 Two items were firmly on the European economic agenda in the 1990s: financial market integration and the creation of a common or single currency. The former was supposed to have been achieved in 1992 (via the Single Market Act, with some derogations), and the latter came into being on January 1, 1999. This study is concerned with a particular connection between the two themes, namely the process of financial intermediation and especially the role of banking. 1.1 Financial & Monetary Integration in Europe Up until the mid-1980s, European financial intermediation was, as else­ where 'on shore' in the post-war period, broadly characterised by a relatively high degree of diverse regulatory control and with cross-border restrictions (e.g., in the form of exchange controls). This resulted in the administration of interest rates and pegging of prime market yields, as well as restrictions on intermediary specialisation. Hence, it was easy to understand why price c ,etition was hardly ever seen. Within this kind of environment, banks and other financial intermediaries (OFIs) competed mainly on non-price terms - for example, through the expansion of branch networks. The Single Market Programme (SMP),l launched in 1986, was in a com­ plex way intended to level out and open up the domestic markets of the European Union (EU) to competition from entities in other Member States.