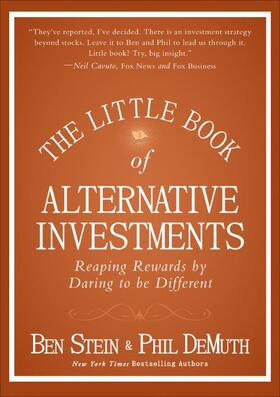 Introduction: Are You Alternative? Dare to Expose Yourself.Chapter One: Everything You Know Is Wrong: Classify Your Investments the Alternative Way.Chapter Two: Efficient Market Theory and Its Discontents: Out with the Old, In with the New--Overhauling the 60/40 Portfolio.Chapter Three: Collectibles as Investments: Beauty in the Eye of the Marketplace.Chapter Four: More Alternatives We Don't Love: The Elephant's Graveyard of Financial Products.Chapter Five: Conventional Alternatives I--Commodities: To Make a Killing, Take Out a Contract.Chapter Six: Conventional Alternatives II--Real Estate: In Real Estate We Trust.Chapter Seven: The Ultimate Alternative Investments: Hedge Fundamentals.Chapter Eight: So Why Invest in Hedge Funds?: Okay, We Lied.Chapter Nine: A Field Guide to Hedge Funds, Part One: The Long and the Short of It.Chapter Ten: A Field Guide to Hedge Funds, Part Deux: Arbitrage, et al.Chapter Eleven: One- Fund Solutions: Destroy All Replicants--or Not?Chapter Twelve: Hedge Funds Pigs in Mutual Fund Blankets: The Mutual Fund Beauty Pageant Begins.Chapter Thirteen: Adding Alternative Investments to Your Portfolio: Finding Your Portfolio's G-Spot.Conclusion: Quest into the Unknown.Appendix: Fundamentals.Acknowledgments.About the Authors.

Stein, Ben
Ben Stein is a respected economist who is known to many as a movie and television personality, but has worked more in personal and corporate finance than anywhere else. He has written about finance for Barron's, the Wall Street Journal, the New York Times, and Fortune; was one of the chief busters of the junk-bond frauds of the 1980s; has been a longtime critic of corporate executives' self-dealing; and has cowritten eight finance books. Stein travels the country speaking about finance in both serious and humorous ways, and is a regular contributor to CBS's Sunday Morning, CNN, and Fox News. He was the winner of the 2009 Malcolm Forbes Award for Excellence in Financial Journalism.Phil Demuth is Managing Director of Conserv-ative Wealth Management LLC, a registered investment advisor to high-net-worth individuals, institutions, and foundations. He has cowritten seven books with Ben Stein and has also written for the Wall Street Journal, Barron's, Louis Rukeyser's Mutual Funds newsletter, and the Journal of Financial Planning. His television appearances include Ludlow & Company, Glenn Beck, Squawk Box, Forbes on Fox, and Wall Street Week.