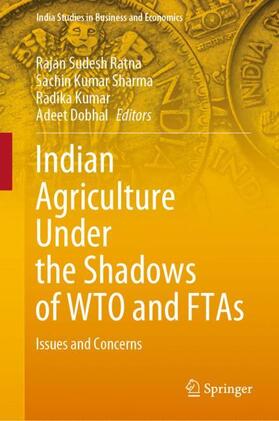 This book examines the various issues and concerns faced by Indian agriculture under the obligations of WTO and the Free Trade Agreements. While the issues discussed pertain mainly to India, the lessons can also be derived for many other similarly placed developing countries. The book delves into various aspects of Indian agricultural trade and evaluates the domestic policies and regulations of government while also looking at external factors like WTO, free trade agreements and non-tariff barriers. Chapters of this book have been contributed by eminent agricultural economists, lawyers and social scientists providing the perspective from their sector.

This book highlights the challenges and opportunities for agriculture sector under the rapidly growing regional trade agreements and results of negotiations under the WTO. It also provides critical insights into the ongoing fisheries subsidies negotiations at the WTO and issues relating to non-tariff measures. The findings have broad implications for developing countries in general and India in particular. This book will greatly benefit trade negotiators, policymakers, civil society, farmer groups, researchers, students, and academics interested in issues related to the WTO, FTAs, tariff and non-tariff barriers and other allied issues concerning Indian agriculture. The techniques used in analytical part will mostly benefit the researchers as they can not only use these techniques and methodologies for their future research, but to also carry the research forward. The book is useful for many educational institutes which teach international trade, agricultural economics, and WTO and FTAs studies.

Sudesh Ratna, Rajan
Rajan Sudesh Ratna has been working in the United Nations Economic and Social Commission of Asia and the Pacific since July 2012 and is currently posted in South and Southeast Asia office in New Delhi. Dr. Ratna has previously worked in the Government of India for 25 years (as a civil servant from Indian Trade Service), initially in the Directorate General of Foreign Trade (DGFT) and later in the Ministry of Commerce handling the regional and multilateral trade policy issues. While working there, he formulated India's Foreign Trade Policy, Duty Free Quota Free Scheme for LDCs and participated in several negotiations relating to WTO and Free Trade Agreements, including rules of origin. From June 2008 to December 2010, he worked as Professor, Centre for WTO Studies, Indian Institute of Foreign Trade, New Delhi, where he carried out research on issues relating to WTO (Agriculture, Environmental Goods and Services, TBT and NAMA) and India's FTA/PTA negotiations. He has published several books and articles.  Sachin Kumar Sharma is currently working at the Centre for WTO Studies as Associate Professor. He completed his Ph.D. in Economics from Jawaharlal Nehru University, New Delhi. He has undertaken research on various issues related to WTO, International trade and agriculture negotiations. He actively participated in various outreach activities conducted by CWS. He has authored many reports for the Ministry of Commerce on various issues related to Green box, India's domestic support notifications, food security, Agreement on Agriculture, G-33 proposal on food security, etc. His research interests include WTO, subsidies, food security, free trade agreement, CGE modelling, agriculture negotiations and human development.  Radika Kumar is currently working as Adviser, Infrastructure Policy, Trade Oceans and Natural Resources Directorate, Commonwealth Secretariat. Dr. Kumar holds a master's degree in economics from the University of the South Pacific and Ph.D. in Economics from The University of the South Pacific. Her research areas include international trade and economics; WTO multilateral rules and SIDS; 4th industrial revolution; agriculture and fisheries subsidies; trade negotiations (regional & multilateral); trade in services; trade policies. Adeet Dobhal is a Senior Research Fellow at the Centre for WTO Studies, Indian Institute of Foreign Trade, New Delhi. A law graduate from Amity Law School, Noida, India, he has been actively involved in providing strategic legal advice and inputs on international trade issues, WTO negotiations and disputes. At the Centre, Adeet has worked on several areas of critical importance for the Government of India including agricultural trade, food security and e-commerce, among others. His research interests include trade law, investment law and dispute resolution.