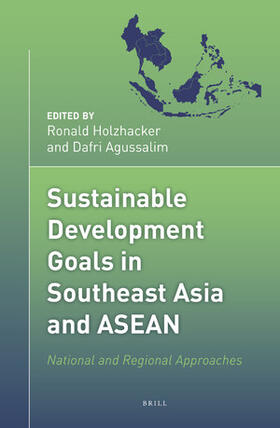 The international community has come together to pursue certain fundamental, common goals over the coming period to 2030 to make progress toward ending poverty and hunger, improving social and economic well-being, preserving the environment and combating climate change, and maintaining peace. The Sustainable Development Goals (SDGs) have been agreed to by states, which have in turn adopted national targets and action plans.

This volume studies the governance and implementation of these goals in Southeast Asia, in particular the difficulties in the shift from the international to the national, the multi-level challenges of implementation, and the involvement of stakeholders, civil society, and citizens in the process. Contributors to this volume are scholars from across Southeast Asia who research these issues in developing (Cambodia, Laos, Myanmar), middle-income (Indonesia, Malaysia, Philippines, Thailand, Vietnam), and developed countries (Brunei, Singapore) in the region. The perspectives on governance and the SDGs emerge from the fields of political science, international relations, geography, economics, law, health, and the natural sciences.

Part 1: Institutions and Governance for the Sustainable Development Goals

Part 2: Accountability to Citizens and Human Rights to Ensure Progress toward the SDGs

5 Human Rights and Sustainable Development Goals: the Philippines in the Postnational

Part 3: SDGs and Progress on the Social Agenda in Middle-Income and Developing Countries in Southeast Asia

Part 4: SDGs and the New Urban Agenda, Cities, and Transport

8 Urban Transformation in Indonesia, the SDGs, and Habitat III: Political Will, Capacity Building, and Knowledge Production

9 A Vision in Which Every Family Has Basic Shelter

Part 5: SDGs and the Environment, Clean Air and Water for All

11 Transboundary Haze, ASEAN, and the SDGs: Normative and Structural Considerations

Part 6: SDGs and the Economic Agenda for Inclusive Economic Growth and Decent Work for All

14 Legal Protection of Construction Workers and the Right to Safe Working Conditions: Lessons from Cambodia

15 The Bumblebee Doctrine: Small and Medium-Sized Enterprises as a Force for Achieving the Sustainable Development Goals in Myanmar

17 Cooperation of Cooperatives: Partnership towards SDGs

Holzhacker, Ronald
Prof. Ronald Holzhacker, Ph.D. (University of Michigan, Ann Arbor, 1997), University of Groningen, the Netherlands, is Professor of Comparative Multilevel Governance and Regional Structure in the Faculty of Spatial Science, Department of Spatial Planning and Environment, and the Faculty of Arts, Department of International Relations and International Organization. He holds a PhD from the University of Michigan in political science, and a JD from the University of Minnesota Law School. He is broadly interested in questions of governance, human rights, and the interaction between civil society organizations and institutions in political systems. He is founding Director of the Groningen Research Centre for Southeast Asia and ASEAN (SEA ASEAN) located in Groningen and Universitas Gadjah Mada, Yogyakarta, Indonesia.
He leads an inter-disciplinary team of scholars and a group of PhD researchers engaged in theoretically driven comparative research focused on governance, societal impact, and sustainable society in Southeast Asia. He has published in such journals as Law & Policy, Comparative European Politics, Journal of European Integration, European Union Politics, Nations and Nationalism, Party Politics, Journal of Legislative Studies, The Asia Pacific Journal of Public Administration and The Journal of South East Asian Human Rights. He is co-editor of numerous books, most recently Decentralization and Governance in Indonesia (New York: Springer, 2016).

Dafri Agussalim, Ph.D. (Gadjah Mada University, 2015), is Senior Lecturer at the Department of International Relations and Executive Director of the ASEAN Study Center, Faculty of Social and Political Sciences, Universitas Gadjah Mada, Yogyakarta, Indonesia. He is also a Visiting Fellow at the Indonesian Military Academy and some private universities in Indonesia, as well as researcher at the Security and Peace Study Center, UGM; Human Rights Study Center, Universitas Islam Indonesia (UII); and International Institute for International Studies, UGM. He obtained his Master of Arts in International Relations from the Australian National University and PhD from Universitas Gadjah Mada in 2015. His fields of interest are Indonesian foreign policy, ASEAN, human rights and international security. He has published books, articles, book chapters, conference papers, commentaries and reports on issues relevant to politics and security, as well as human rights.