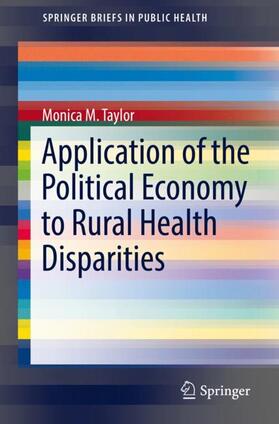 Taylor Application of the Political Economy to Rural Health Disparities

Taylor Application of the Political Economy to Rural Health Disparities

This thought-provoking monograph analyzes the longstanding political and economic structures underlying entrenched health inequities in rural areas worldwide. Bypassing familiar data on the subject, it critiques existing approaches to why core social determinants of health are underrepresented in rural communities, and synthesizes knowledge from health behaviors to spatial politics to make creative, equitable suggestions for intervention. The author reviews classic economic and current sociopolitical theory to pinpoint governments’ decision-making processes behind resource allocation as they translate into poor service access, service quality, and health outcomes. In reply, corrective policy measures are recommended to address these conditions at the root-cause level, in keeping with global goals of improved health for all.

Included in the coverage:

· The political economy: an era of institutional cynicism?

With its forceful argument for dealing with a growing but often invisible crisis, Application of the Political Economy to Rural Health Disparities makes a significant text for graduate and undergraduate programs in public and international affairs, planning and public policy, public health, public administration, and economics. Public health and advocacy organizations will also benefit from the book’s vision.

Chapter 1: Rural Health Disparities: The Political Economy
The disparate health outcomes among persons who reside in rural areas, irrespective of culture, religion, or racial and ethnic composition, have been reported elsewhere and rather abundantly in the scientific literature. Geographical variations instigate excess morbidity and mortality in rural areas and is a phenomenality salient in both international and national settings. Hence, the need to conjure up a theoretical foundation is imminent, to identify underlying causes for persistent health disparities in this region.
This book does not aim to echo existing research or provide a review on the plight of rural health, but, rather, attempts to describe this issue from a different school of thought - the political economy. The political economy is concerned with relations between the polity and social institutions and their influence on economic events. The ideologies that manifest from this relationship precludes the economic decision-making of the polity and any subsequent policies that may permit any form of resource allocation to citizens. The relationship between both structures affects an unspoken economic arrangement, including the degree to which resources are available on the basis of such arrangements.
Given this theoretical stance, this chapter describes rural health disparities in the context of the political economy perspective.

Chapter 3: Social Disorganization in Rural Areas
Social disorganization theory is utilized in this chapter to demonstrate the behavioral impact of certain economic choices on rural communities. Social disorganization theory links the association of high crime and violence rates to ecological structures in the environment. Widely used in urban settings, behaviors of rural community members are of central importance to this chapter. In communities where social disorganization is evident, there is a lack of capacity in its members to solve problems jointly in their shared environment due to ethnic diversity or residential instability. As this theory is explored, other social factors are examined; additional social factors include social cohesion, civic engagement, and political participation.

Chapter 4: Rural Health Disparities: Public Policy Responses
In the previous chapter, evidence between the influence of political power and subsequent economic events were substantiated. This chapter now reflects on the fallout from this relationship; that is, the "hallowing out" of big government in the alignment of robust social welfare policies necessary to bring geographical justice to rural populations. This chapter evaluates select policies in the southeast regions of the U.S. to determine if such policies were ineffective, progressive, or made demonstrable improvements in the health and welfare of rural populations.

Chapter 5: Conclusion
This chapter justifies the political economy approach to explain why rural health disparities are pervasive. In addition, a summary of the outcomes of economic events, social disorganization in rural areas, and an assessment of existing rural health policies is discussed.

Taylor, Monica M.
Monica M. Taylor, PhD, MPH, is on the faculty of the graduate and undergraduate programs in Healthcare Administration/Business at Colorado State University - Global Campus in Greenwood Village, Colorado, USA. Dr. Taylor also is contributing faculty in the Masters in Public Health program at the College of Health Sciences at Walden University in Minneapolis, Minnesota, USA; course chair/adjunct associate professor in the undergraduate program in Health Services Management at University of Maryland - University College in Adelphi, Maryland, USA; and, adjunct professor in the doctorate/masters program of Healthcare Administration at Franklin University in Columbus, Ohio, USA.