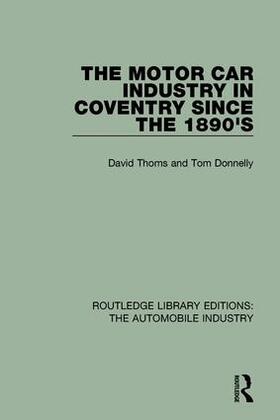 Thoms / Donnelly The Motor Car Industry in Coventry Since the 1890s

Thoms / Donnelly The Motor Car Industry in Coventry Since the 1890s

This book, originally published in 1985, examines the development of the car industry in Coventry within both its local context and the wider economic environment. It is a study of expansion and adjustment which reflects the broader pattern of Britain's industrial history. The book analyses the emergence and early dominance of Coventry's motor manufacturers, the appearance of the volume producers in the 1920s and the instability of the post-war era. The relationship between cars and other sectors of the local economy, particularly cycles, machine tools and aircraft, is discussed, while the significance of the two world wars receive special attention. Extensive use is made of original sources material, much of which, prior to publication, had received little or no attention from business historians.

1. The Origins of the Motor Vehicle Industry in Coventry 2. Organization and Growth to 1914 3. The Impact of War, 1914-1918 4. Between the Wars: Mergers and Mass Production 5. The Motor Manufacturers and the Second World War 6. Growth, Stagnation and Merger, 194568 7. The End of the Boom. Conclusion.