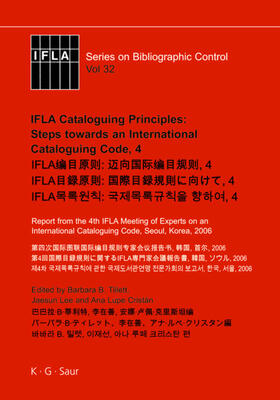 Report from the 4th IFLA Meeting of Experts on an International Cataloguing Code, Seoul, Korea, 2006

The IFLA Series on Bibliographic Control was formerly known as the UBCIM series (Universal Bibliographic Control and International MARC ). It consists of reports reflecting the ongoing process towards International Cataloguing Principles, which began in 2003. Through the series of meetings represented by each volume the reader will be able to track the development and consultation taking place throughout different parts of the world that will culminate with the creation of a truly international set of principles to guide the development of cataloguing codes worldwide.

ISBD: the challenge of updating standards whilst maintaining stability (S. 190-191)

As the title of the conference says, it is a big challenge to keep standards updated that have endured nearly 36 years taking into account the evolution of publications nowadays. I am going to present a standard well known by all of you, but in order to understand the recent decisions and activities, I am going to present a point of view not so well known, although the previous chair of the Review Group John Byrum has shown it all around the world with his several papers in which I am pleased to acknowledge this presentation is based on with his permission, namely the process of creation and revision of the standards for bibliographic description, and the revision process that has followed their creation focussing on the most recent activities.

The concept of the International Standard Bibliographic Description dates back to the 1969 International Meeting of Cataloguing Experts in Copenhagen, sponsored by the IFLA Committee on Cataloguing. The development of this standard was pushed by the automation of bibliographic control as well as the economic necessity of sharing cataloguing. The main goal of the IFLA agreement was at that time, and continues today, to offer consistency when sharing bibliographic information. The ISBDs were intended to serve as a principal component of IFLA’s program to promote Universal Bibliographic Control, the ideal of which in Dorothy Anderson’s words, is “to make universally and promptly available, in a form which is internationally acceptable, basic bibliographic data for all publications issued in all countries.”

The ISBDs seek to serve three primary purposes: First, and of greatest importance, they are intended to make possible the interchange of records from different sources by means of establishing the content of bibliographic records and regularizing the form in which this should be presented. Secondly, ISBDs have assisted in the interpretation of records across language and scripts barriers by means of prescribed punctuation, so that records produced for users of one language can be interpreted by users of other languages.

Thirdly, they have facilitated the conversion of bibliographic records to electronic form. Except this last purpose, which corresponds to a time when ISBD was first created, the other objectives continue to be pursued. The first of the ISBDs to be published was the International Standard Bibliographic Description for Monographic Publications (ISBD (M)), which appeared in 1971, but a revised text was published in 1974 as the "First standard edition".

Along the way, the need was felt for a general framework to which all the ISBDs would conform, resulting in production of ISBD(G) published in 1977, the primary utility of G is that of ensuring harmony among the other ISBDs. For article level publications, Guidelines for the application of the ISBDs to the description of component parts was issued in 1988. The entire inventory of the ISBDs in all their editions is listed on IFLANET, in every case, at least the latest version of each ISBD is freely available in an HTML or PDF format.