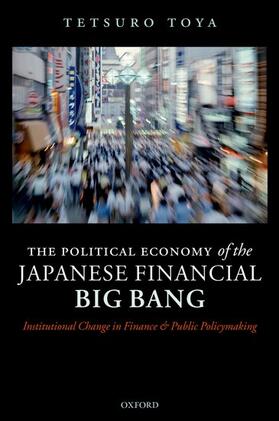 In 1996, the Japanese government introduced a policy package initiating massive deregulation and liberalization in the nation's financial sector, referred to as Japan's financial 'Big Bang.' This book argues that the emergence of the Big Bang Initiative poses numerous challenges to conventional interpretations of Japanese politics and represents a clear case of institutional change in Japanese finance. Whereas many observers stress continuity in Japanese politics,
this book argues that the emergence in the 1990s of performance failures and scandals attributed to the bureaucracy, as well as the increase in the likelihood of a change in government in this period, led policymaking patterns surrounding the Big Bang to differ radically from those dominating public
policymaking in the past.

These developments led to change in the nature of the alliance between the ruling Liberal Democratic Party (LDP) and the Ministry of Finance (MOF), to a shift in priorities within the MOF, and to a heightened role for the public in policymaking. The result was that the MOF, long perceived as 'entrenched' and seeking to maximize tangible tokens of organizational power, became more than willing to launch the Big Bang, despite the fact that these reforms would strip the ministry of many of its
regulatory tools and sever the ministry's close ties with the financial sector. The book also argues that these new developments prevented financial industry actors from forestalling these reforms, as they had done in the past with other reforms similarly threatening the viability of weaker firms. The
findings reveal that not only politicians, but also bureaucrats and interest groups, have reasons to pursue public support to enhance their respective political influence. Consequently, well-organized groups do not always prevail over the unorganized public.

Toya, Tetsuro
The late Tetsuro Toya obtained his PhD from Stanford University in 2000. He completed his undergraduate studies at Tokyo University. He has held positions in the Secretarial Division, Minister's Secretariat, Ministry of Finance and was a Visiting Fellow at the Research Institute of Economy, Trade and Industry (RIETI).