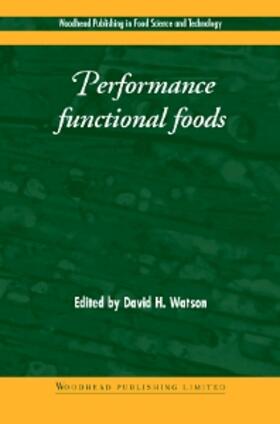 One of the most innovative sectors in the rapidly growing functional foods market is that comprising so-called 'performance' functional foods which affect mood, mental and physical performance. An important issue in ensuring long term growth in this sector is to consolidate research on the complex links between nutrition and functional ingredients such as herbs, mood and cognitive performance. With its distinguished international team of contributors, this collection reviews key research in this important new area.

After an introductory review of market trends, chapter two discusses recent research on the interactions between food, stress and mood, looking in particular at the role of carbohydrates. The following chapter reviews current evidence for the impact of a number of nutrients and herbal ingredients on mood and cognitive performance, including herbs such as St John's wort and kava kava. Chapter three then discusses the range of medicinal plants that have been associated with improvements in mental and physical performance. The following chapters then look in more detail at particular topics including phyto-oestrogens and cognitive function, the functional benefits of ginseng, ginkgo biloba and Alzheimer's disease, polyphenols and, finally, the impact of caffeine on mental performance and mood.


- Reviews the range of ingredients used in 'performance' functional foods
- Summarises research on the complex links between nutrition, functional ingredients, mood and cognitive performance
- Edited by a leading authority in the field and with contributions from experts worldwide