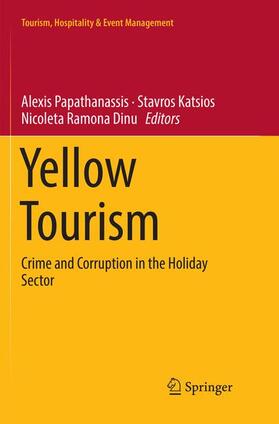 Crime and Corruption in the Holiday Sector

This book presents the latest research and novel case studies on crime and corruption in the tourism and hospitality industry. It approaches tourism as both a globalised business impacting the livelihood of millions of people, and a highly challenging field of action for national legislators and law enforcement agencies. The global nature and ubiquity of tourism, as well as the core elements of the holiday experience - such as interactions with unknown environments and places, a care-free mind-set, novelty-seeking behaviour and anonymity - render it highly susceptible to victimisation, crime and corruption. Accordingly, the book addresses a comprehensive set of emerging issues, including: conflict and fraud during holidays; criminal and negligence offences at tourists’ expense; exploitation and mistreatment of service workers; deterioration of heritage, cultural and natural resources; and securitisation of tourism.

Papathanassis, Alexis
Prof. Dr. Dr. Alexis Papathanassis studied at the University of Bath and the London School of Economics (UK). He completed his PhD in Economic Sciences at the Leibniz University (Hanover) in Germany. Prior to joining fulltime academia, Alexis pursued a career at TUI. Upon his departure from the group as a business development manager with TUI Infotec, Alexis had already participated and successfully led various systems integration projects in six TUI subsidiaries around Europe. Since 2005, Alexis Papathanassis is a Professor for Cruise Management and e-Tourism at the Bremerhaven University of Applied Sciences. He currently acts as: Dean of the Faculty of Management & Information Systems, Co-Director of the Institute for Maritime Tourism and Chairman of the Cruise Research Society. He is also visiting Professor at the Bremen University of Applied Sciences, Russian Academy of Foreign Trade, City University of Macau and a member of the German Tourism Research Society. He also works regularly as a consultant for a number of tour operators and cruise companies. Alexis' publication activity mainly focuses on the cruise sector and comprises over 100 contributions in textbooks, peer-reviewed scientific journals and conferences.
Prof.Dr. Stavros Katsios is a Professor of International Economic Relations and International Economic Crime at the Ionian University, Corfu, Greece and Director of the GEOLAB Institute. He specialises in governance and international economic crime (e.g. corruption, money laundering). He has served as the representative of the Ionian University at the European Migration Network (E.M.N), as chairman of the University Library, as elected Vice Rector for Economic Management and Development of the Ionian University and represented the Greek Rectors' Conference for the formulation of the Qualifcations' Framework of the Greek Educational System (2011-2015). He has studied law at the University, Cologne, Germany, at Georgetown University, Washington D.C., USA and at the Aristotle University, Thessaloniki, Greece. He is a lawyer, member of the Thessaloniki Bar (1990) and of the German Bar Association (1996). He has lectured on economic crime at the School of National Security of the Hellenic Police Academy and at the Hellenic Banking Institute (HBA). 2004 he was appointed to the Working Group "Non Tax Revenues-Money Laundering Proceeds" of the Greek Ministry of Economy for drafting the new Greek Tax Law and became the first Greek member of the USA-based "Association of Certified Ant-Money Laundering Specialists" (ACAMS). Since 2009 he is a frequent invited speaker at the International Symposium of Economic Crime, Jesus College, Cambridge University, UK. He has published various books and articles in Greek and foreign scientific Journals volumes. He was the strategic advisor of Corfu's bid for European Capital of Culture 2021. In December 2016 he was appointed member of the Greek National Risk Assessment Expert Committee on Money Laundering and Corruption.

Prof.Dr. Ramona Nicoleta Dinu is a Professor of Economics at Ovidius University, Constanta, Romania, since 1998. She completed her PhD in Economic Sciences at the Alexandru Ioan Cuza University (Iasi) in Romania and post-doctorate studies at Romanian Academy. Her main scientific work was undertaken in the areas of economic growth and development, institutions and macroeconomic performance. She initiated and conducted the implementation of a number of research and educational projects financed through EU funds, some of them having a special focus for tourism field. Ramona currently acts as a Senator in Romanian Parliament, being the Vice-president of the Committee for Development and Economic Strategy and Member of the Committee for National Budget, Finance, Banking Activity and Capital Market. She is also the Coordinator of working group for Tourism at the level of Union Salvation Romania Fraction (USR Tourism).