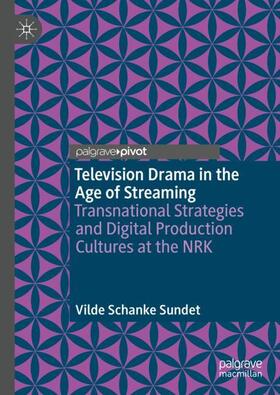 Sundet Television Drama in the Age of Streaming

Transnational Strategies and Digital Production Cultures at the NRK

Sundet Television Drama in the Age of Streaming

This book examines television drama in the age of streaming—a time when television has been reshaped for national and international consumption via both linear ‘flow’ and on-demand user modes. It builds on an in-depth study of the Norwegian public service broadcaster (NRK) and some of its game-changing drama productions (Lilyhammer, SKAM, blank). The book portrays the formative first decade of television streaming (2010-2019), how new streaming services and incumbent television providers intersect and act in a new drama landscape, and how streaming impacts existing television production cultures, publishing models and industry-audience relations. The analysis draws on insight gained through more than a hundred interviews with television experts and fans, hundreds of hours of observations, and unique access to industry conferences, meetings, working documents, and ratings. The book combines perspectives from production studies, media industry studies, and fan studies to inform its analysis.

Sundet, Vilde Schanke
Vilde Schanke Sundet (PhD) is a researcher in media and communication at the University of Oslo, Norway. She has published extensively on topics of television production, media industries, media policy and audiences/Fans, and she is an expert on online drama.