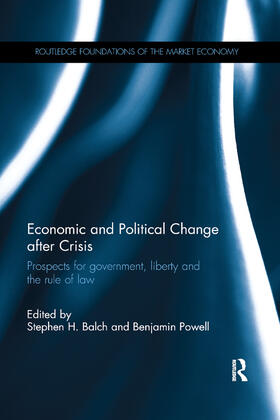 Prospects for government, liberty and the rule of law

The U.S. Government’s accumulated national debt and unfunded liabilities in social security and Medicare could be pushing the country towards a fiscal crisis. How could such a crisis be avoided? If a crisis does strike, how might it be dealt with? What might be the long term ramifications of experiencing a crisis? The contributors to Economic and Political Change After Crisis explore all of these questions and more. The book begins by exploring how past crises have permanently increased the size and scope of government and how well the rule of law has been maintained during these crises. Chapters explore how these relationships might change in a future crisis and examine how the structure of the U.S. government contributes to a tendency towards fiscal imbalance. In a provocative contribution, the authors predict a U.S. government default on its debt. The book concludes by considering how a fiscal crisis might precipitate or interact with other forms of crises. Social scientists from a variety of disciplines, public policy makers, and concerned members of the general public would all benefit from the contributions contained in this book. If the U.S. is going to avoid a future crisis, or do as well as possible if a crisis occurs, the arguments in these chapters should be given serious consideration.

Table of ContentsAcknowledgements About the Authors 1 Introduction Stephen Balch and Benjamin Powell PART I: Crisis and Government Power2 Crisis without Leviathan? Robert Higgs 3 The Rule of Law during Times of Economic Crisis Todd Zywicki PART II: Fiscal Crisis4 Fiscal Crisis as a Quality of Progressivist Democracy Richard Wagner 5 The Consequences of a United States Default or Repudiation Jeffrey Rogers Hummel PART III: Regime Crisis6 The United States Military’s Role in National Crises: Past, Present, and Future Paul Springer 7 The Dark Side of Modernity: Existential Threats to Life as We Know It Tevi Troy