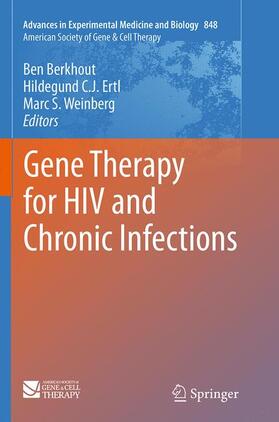 This book centers  on gene therapy and gene transfer approaches to prevent or treat chronic virus infections. The main focus is on the Big Three: human immunodeficiency virus (HIV-1), hepatitis B virus (HBV) and hepatitis C virus (HCV). Ample anti-HIV drugs are currently available in the clinic and the development of an effective combination therapy has dramatically improved the lifespan and quality of life of infected individuals. A similar trend can already be recognized for HBV and HCV: the development of multiple (directly acting) antiviral drugs and plans to control or even cure the infection. However, approaches that help prevent infection, or which provide long-lasting treatment (such as a cure) remain important goals.   Immunization through gene transfer vehicles encoding immunogenic viral proteins shows promise in preventing infections with complex, highly variable, viruses such as HIV-1 or HCV. Gene therapy applications for virus infections have been discussed since the early 1990’s. Whereas a true cure seems difficult to achieve for HIV-1 due to its intrinsic property to deposit its genome into that of the host, such attempts may be within reach for HCV where spontaneous viral clearance occurs in a small percentage of the infected individuals. The prospect of original gene therapy approaches may provide alternative ways to reach the same endpoint by, for example, silencing of CCR5 expression post-transcriptionally. Many alternative antiviral strategies have been developed based on a variety of novel molecular methods: e.g. ribozymes. Some studies have progressed towards pre-clinical animal models and a few antiviral gene therapies have progressed towards clinical trials. This book provides an overview of this rapidly progressing field, while focusing on the interface of gene therapy and immunology/vaccinology.

Berkhout, Ben
Ben Berkhout is Head of the Laboratory of Experimental Virology at the Academic Medical Center (AMC) of the University of Amsterdam (the Netherlands), where he is Professor of Virology. Ben received his Ph.D. in 1986 at the University of Leiden on gene regulation in the RNA bacteriophage MS2. He did post-doctoral training at the Dana Farber Cancer Institute, Harvard Medical School (Boston) and the National Institutes of Health, Laboratory of Molecular Microbiology (Bethesda). He moved back to the Netherlands in 1991 to set up HIV-1 research at the University of Amsterdam. Ben has published over 440 scientific papers that were cited more than 14500 times, yielding an H-index of 62. He is currently editor of several journals (e.g. Retrovirology, Virus Research, Journal of Biomedical Science) and editorial board member of many more. His current research includes basic RNA studies (new RNAi mechanisms, structure and function of HIV-1 RNA) and applied research (RNAi-based gene therapy for HIV-AIDS, novel live-attenuated vaccine designs).Hildegund C. J. Ertl is a Professor at the Wistar Institute where she serves as the Director of the Wistar Vaccine Center. She is an Adjunct Professor in Pathology at the University of Pennsylvania and an Adjunct Professor in Pediatrics at the Children's Hospital of Philadelphia. She obtained her MD in 1977 from the George-August University in Göttingen, Germany and did her postdoctoral studies at the John Curtin School in Canberra, Australia. She was an Assistant Professor at the Dana Farber Cancer Institute in Boston, MA and then moved as an Associate Professor to the Wistar Institute, Philadelphia, PA. Her research focuses on viral immunology with emphasis on development of viral vector vaccines and immunological consequences of virus-mediated gene transfer. She has over 220 publications and serves as an Editor on several journals (Current Opinion in Immunology, Current Opinion in Virology, Molecular Therapy, and others). Dr. Marc S. Weinberg is a molecular biologist and is currently Associate Professor at the University of the Witwatersrand and a Visiting Professor at the Scripps Research Institute, USA. His research focuses on the therapeutic functions of ribonucleic acid (RNA). He graduated with a PhD from The University of the Witwatersrand, South Africa in 2002 and was a postdoctoral fellow at City of Hope Medical Center, California, USA where studied fast-cleaving hammerhead ribozymes and RNA-based transcriptional modulators against HIV. Thereafter, his work turned to small RNAs that attenuate viral gene function and he was one of the first to show that small single-stranded RNAs can switch genes off directly using components of a nuclear RNA interference pathway. Dr. Weinberg has made important contributions to the development of novel RNA structures that are processed into safe and useful antiviral inhibitors, specifically against HIV and HBV. Lately, his work focuses on new ways to modulate non-coding RNA genes using cell-selected aptamers, CRISPR/Cas9 modulators and mobilization lentiviral vectors as delivery vehicles, with specific emphasis on how these approaches can be used against latent HIV infection. Dr. Weinberg has over 50 publications and holds 6 patents for RNA applications in biopharama and agriculture. He has also supervised 20 graduate students to completion. He is on the editorial board of Molecular Therapy Nucleic Acids, Journal of Biological Methods and the South African Journal of Science.