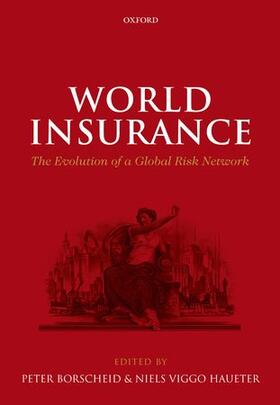 Since the end of the eighteenth century, the insurance industry has cast a safety net around the world, first in the British Isles and then further afield, irrespective of cultural, political and ideological divides. Unlike previous publications on insurance history, which tend to discuss the development of national markets or individual companies, this book focuses on the creation of networks across borders from the end of the eighteenth century to the present day.

Distinguished international economic historians draw upon examples from twenty countries across the continents to demonstrate how what was called the 'British system' of risk management spread out in waves, and describes the forces that made this possible - first among them migration from Europe and international trade. The book explores the economic, political, religious, and cultural obstacles that blocked the path of this European invention - not only religious law and traditional practices,
but above all protectionism, inflation, and political ideologies. It examines the process of transformation through which modern insurance supplanted traditional forms of protection against perils and risks and was able to keep on offering new ways of dealing with the risks of modern life. As well
as discussing primary insurance, it also considers the role played by reinsurance, without which the losses arising out of today's natural and man-made disasters would be immeasurably greater. Finally, taking modern-day disaster scenarios as examples, the book shows just what the limits of insurability are and what risks worldwide networks entail.

Borscheid, Peter
Peter Borscheid is Professor Emeritus of Economic and Social History at the University of Marburg. He has published numerous monographs on the history of science and technology, the history of the textile industry, the standard of living, the history of old age, and old-age pension, the cultural history of acceleration. He led several projects and international working groups on insurance history. He also served as a member of the German government commission "The
situation of the older generation in the Federal Republic of Germany".

Niels Viggo Haueter is Head of Swiss Reinsurance Company's Corporate History team and the company's historical archives. He serves as an academic advisor on insurance and reinsurance history to the European Association for Banking and Financial History in Frankfurt.