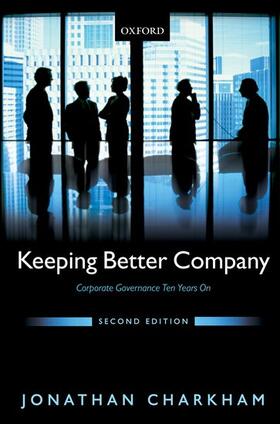 How should companies be organized? To whom should boards of directors be responsible - shareholders, or a wider group of stakeholders? In this fiercely competitive world we cannot judge our own system of corporate governance in isolation; it must bear comparison with the best. The second edition of this acclaimed and well-established book aims to do just that.

Since publication of the first edition interest in corporate governance has greatly increased, codes have proliferated, and principles laid down nationally and internationally. In Keeping Better Company, the author describes developments in the system of corporate governance - both the business environment and the particular structures of company organization - in five major industrial countries: Germany, Japan, France, the USA, and the UK.

This second edition is fully revised, updated and expanded, and includes a new conclusion looking at a number of ongoing issues in corporate governance, and an appendix discussing the role of international organizations.

Charkham, Jonathan
Jonathan Charkham formerly an Honorary Fellow of the Cass Business School, City University, and a member of the Board of the Corporate Governance Network, and a former advisor to the Governor of the Bank of England. As well as the previous edition of Keeping Good Company (OUP, 1994) he has also co-authored Fair Shares: The Future of Shareholder Power and Responsibility (OUP, 1999) with Anne Simpson. He died in 2006.