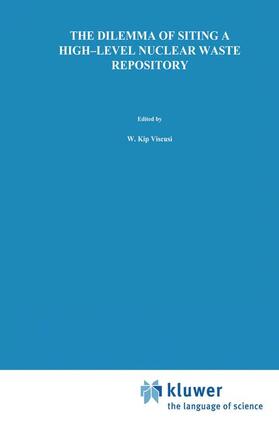 This book explores siting dilemmas - situations in which an "authority" (e.g., Congress, a consortium of utilities) deems it in the best interest of society to build a facility such as an incinerator, but opponents living near the proposed site thwart the plan. Facility developers typically attribute local opposition to selfishness or radically inaccurate views of the risks posed by the facility. We examine the validity of these conclusions by looking in depth at the psychological response that arises when residents are faced with the prospect of living near waste disposal facilities. The particular siting dilemma considered in this book is the problem of how to "dispose" of the high-level nuclear wastes accumulating at nuclear power plants in the United States. These wastes, in the form of "spent" fuel rods, will emit dangerous levels of radioactivity for thousands of years - anywhere between 10,000 and 100,000 years, depending on the margin of safety one adopts. The current proposal is to encase the spent fuel in corrosion-resistant canisters and then to bury these canisters deep underground in a geologic repository. The two of us became involved with the high-level waste issue in 1986 as part of an interdisciplinary research team hired by the State of Nevada. The charge of this team was to estimate the socioeconomic impacts that would accompany a repository if it were built at Yucca Mountain, approximately 100 miles northwest of Las Vegas.