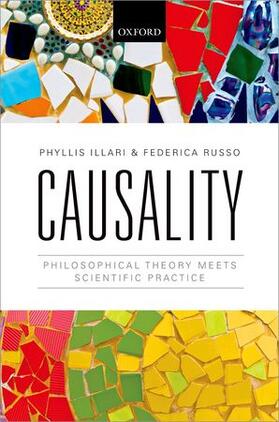 Head hits cause brain damage - but not always. Should we ban sport to protect athletes? Exposure to electromagnetic fields is strongly associated with cancer development - does that mean exposure causes cancer? Should we encourage old fashioned communication instead of mobile phones to reduce cancer rates? According to popular wisdom, the Mediterranean diet keeps you healthy. Is this belief scientifically sound? Should public health bodies encourage consumption of
fresh fruit and vegetables? Severe financial constraints on research and public policy, media pressure, and public anxiety make such questions of immense current concern not just to philosophers but to scientists, governments, public bodies, and the general public.

In the last decade there has been an explosion of theorizing about causality in philosophy, and also in the sciences. This literature is both fascinating and important, but it is involved and highly technical. This makes it inaccessible to many who would like to use it, philosophers and scientists alike.

Federica Russo is Assistant Professor at the University of Amsterdam and has visited the Centre for Philosophy of Natural and Social Science (London School of Economics) from April 2004 to January 2005 and the Center for Philosophy of Science (Pittsburgh) from January to April 2009. She is interested in causality and probability in the social, biomedical and policy sciences, as well as in the philosophical, legal, and social, implications of technology. Federica is part of the editorial board
of the journals Philosophy and Technology and Topoi. She is the author of Causality and causal modelling in the social sciences. Measuring variations (Springer, 2009), and of numerous articles (sole or co-authored) on causality in the social, biomedical, and policy sciences. She has edited several
volumes in philosophy of science and technology, including Causality in the Sciences (OUP 2011) with Phyllis Illari and Jon Williamson.