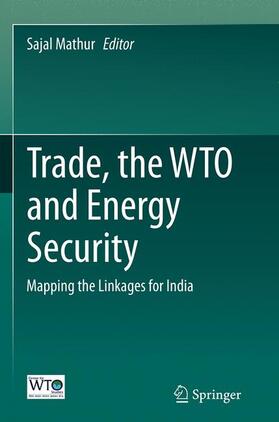 Mapping the Linkages for India

The linkages between WTO rules governing trade and energy security with a certain degree of focus on India are the main subject of this book. The edited volume brings together the views of academics, policymakers and experts with extensive experience covering WTO and international trade issues. The issues examined include mapping the linkages between trade and energy security in the WTO agreements, case law, accession and Doha negotiations; assessing the issues that could be raised by energy deficit or energy surplus countries at the WTO; analyzing the provisions of the ECT and NAFTA vis-à-vis the Indian policy framework and examining the trade regimes of selected OPEC members and other major suppliers of fossil fuels to India. While the Indian perspective is evident in the contributions, this book will also be of interest to an international audience, as trade, the WTO and energy security are global concerns and of relevance to all practitioners and academics working on these issues.

Sajal Mathur has been working as a Professor at the Centre for WTO Studies, Indian Institute of Foreign Trade, New Delhi, India and a Counsellor at the World Trade Organization, Geneva, Switzerland. This book was prepared while on special leave from the WTO. Professor Mathur has completed his studies in Economics from Delhi University (St. Stephens' College), Jawaharlal Nehru University, New Delhi, and the London School of Economics with specialization in environment and development economics. He is currently completing a postgraduate degree in Business Law from the National Law School University of India, Bangalore.

Professor Mathur has extensive experience in trade and development issues having previously worked in the Development Division and the Technical Cooperation and Training Division of the WTO (1998-2004). Prior to joining the Centre for WTO Studies in 2011, he was a Counsellor in the Accessions Division, working on the WTO membership package of several least developed, developing, and transition economies (2004-2011).

Professor Mathur has delivered training programs and served as a resource person in workshops and conferences across the world. He has drafted documentation for several WTO committees and bodies and has written papers on trade, environment, and development issues. He has written for the Economic Times and has also co-edited a book on BRICS: Trade Policies, Institutions and Areas for Deepening Cooperation (CWS, 2013).