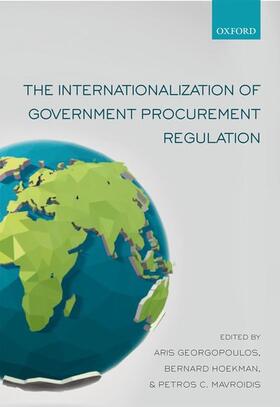 As governments are major buyers of goods and services, foreign companies are keen to be able to participate in procurement opportunities on an equal footing with national firms. This has given rise to the inclusion of procurement disciplines in trade agreements and to internationally-agreed good regulatory practices in this important policy area. The contributions to this book examine how the dynamic mix of bilateral, regional, plurilateral and international norms on
government procurement is reflected in purchasing practices at the national level and whether these are leading to convergence in policies and approaches. The countries studied span both advanced, high-income economies and emerging economies. Some are members of the WTO procurement agreement, others
are not. Most WTO members have decided not to commit to binding international disciplines on procurement in trade agreements. This book explores whether there has been nonetheless internationalization of good procurement practices, and what current public purchasing processes suggest as regards the value added of signing on to binding rules of the game in this area.

The approach taken in the volume is interdisciplinary. Contributors include economists, political scientists, legal scholars, and practitioners with a solid understanding of both the extant international disciplines and national government procurement policies. Each chapter assesses the current state of play as regards legislation and procurement practices; the degree to which industrial policy considerations feature in the relevant regulatory frameworks; the existence and use of domestic
dispute resolution and review procedures that allow firms to contest the behavior of procuring entities; and the availability of data on procurement processes and outcomes.

Mavroidis, Petros C.
Aris Georgopoulos is Assistant Professor in European and Public Law at the School of Law of the University of Nottingham and Head of the Research Unit for Strategic and Defence Procurement of the Public Procurement Research Group. He has been Research Fellow in the Global Economics research area of the Global Governance Programme, EUI and a Grotius Fellow at the Law School of the
University of Michigan. He has taught at Universities in the United States, China, Turkey, Malaysia and Colombia, and is a member of the editorial board of the Public Procurement Law Review. He holds a PhD from the University of Nottingham Law School.

Bernard M. Hoekman is Professor in the Robert Schuman Centre for Advanced Studies at the European University Institute in Florence, Italy. He has held various senior positions at the World Bank, including Director of the International Trade Department and Research Manager in the Development Research Group, and worked as an economist in the GATT Secretariat. He obtained his Ph.D. in economics from the University of Michigan and is a Research Fellow of the Centre for Economic Policy Research and
a Senior Associate of the Cairo-based Economic Research Forum for the Arab Countries, Turkey and Iran.

Petros C. Mavroidis is Edwin B. Parker professor of Law at Columbia Law School, New York and also teaches at the University of Neuchatel, Switzerland. During 2011-16 he was on leave at the European University Institute. He was the American Law Institute chief reporter for the project on 'Principles of International Trade Law: the WTO' that was completed in 2012 and holds a Dr iuris from the University of Heidelberg. His most recent publication is The Regulation of International Trade, MIT
Press.