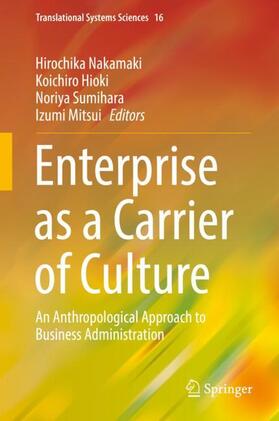 An Anthropological Approach to Business Administration

This volume focusses on the cultural dimensions of enterprise. Here enterprise is viewed as a medium carrying culture, rather than solely an entity of production and management, as is typical in mainstream studies. The approach is based on Tadao Umesao’s definition of culture as a projection of instruments/devices and institutions into the mental/spiritual dimensions of life. Therefore, in our view production and management are among the projections of the cultural aspects of enterprise. This perspective, we believe, constitutes a new frontier in the study of business administration.

This book consists of three parts, the first being “religiosity and spirituality”, the second “exhibitions, performance and inducement,” and the third “history and story.” In Part I, Quaker Codes, ex-votos, and spiritual leadership are discussed in relation to management and behavior, and miracles and pilgrimage. Part II describes exhibitions justifying nuclear power industry within power plants in both Japan and England, the exhibition by English families of their porcelain collections, and the performance skills of orchestral maestros. All of these examples indicate that, through the use of narratives and myths, exhibits and performances overtly and covertly induce visitors or audiences to certain viewpoints and emotions. Part III offers examples of histories and stories of enterprise articulated through the branding and consumption of industrial products, and their display in enterprise museums where the essence of culture and heritage is cherished and emphasized, by and for the wider community and the enterprise itself.

Conjoined as an interdisciplinary team of Western and Japanese researchers, we apply an anthropological approach to the cultural history of enterprise in both Britain and Japan.

Part I. Religiosity, Spirituality, and Business.- Chapter 1. Corporate Society, the Foundation of Order, and "Quaker Codes".- Chapter 2. Management of Miracles and Pilgrimage: A Comparative Study of Votive Offering in Europe and Japan.- Chapter 3. Spiritual Leadership: Background, Theory and Application to Japanese Business Leaders.- Part II. Exhibition, Performance, and Inducement.- Chapter 4. How the "Anomaly" of Nuclear Power Plants Has Been Explained Before and After the 3.11 Disaster in Japan and England.- Chapter 5. Modeling Museums: The Management Culture of Family Porcelain in England.- Chapter 6. An Orchestral Myth: Maestros are Born, and Made.- Part III. History, Story, and Industry.- Chapter 7. Museum and Visitor Center in England: Schism and Conflict over Globalization.- Chapter 8. Brewing Heritage: Issues in the Management of Corporate Heritage in the Brewing Industry in Britain.- Chapter 9. Islay, a Very Tasty Idea: Inventing, Embedding and Selling History in the Contemporary Scotch Whisky Industry.- Chapter 10. One History, Two Narratives: The Corporate Myths of Japanese Whisky Companies.

Nakamaki, Hirochika
Hirochika Nakamaki is a Professor Emeritus of the National Museum of Ethnology, Japan, and Director of Suita City Museum. He is the author of Japanese Religions at Home and Abroad: Anthropological Perspectives (2003), and editor of The Culture of Association and Associations in Contemporary Japanese Society, Senri Ethnological Studies no.62 (2002), co-editor of Business and Anthropology: A Focus on Sacred Space, Senri Ethnological Studies no.82 (2013), and co-editor of Enterprise as an Instrument of Civilization: An Anthropological Approach to Business Administration (2016).Koichiro Hioki is a Professor Emeritus at Kyoto University and Professor of Management at Shujitsu University. He is the author of Ichiba no Gyakushu: Personal Communication no Fukken (Counter Attack of Bazaar: Re-empowerment of Personal Communication) (in Japanese) (2002), Shusse no Mechanism: Ziph K z de Yomu Ky s Shakai (Mechanism of Career Advancement: Competitive Society Read by Zipf Structure) (in Japanese) (1998), and Bunmei no S chi to shite no Kigy  (Enterprise as an Instrument of Civilization) (in Japanese) (1994). He is also a co-editor of Enterprise as an Instrument of Civilization (2016).Noriya Sumihara is a Professor at the Faculty of International Studies at Tenri University, Nara, where he mainly teaches international students about Japanese culture and society, as well as regional studies of Nara from an anthropological perspective. His early work includes long-term fieldwork in a Japanese multinational corporation in North America, while more recently he has been researching the relationship between management philosophy and business practices in Japan, India and Indonesia. He holds a PhD in Cultural Anthropology from New York University, and a BA in Literature from Kobe University.Izumi Mitsui is a Professor of Business Administration in the College of Economics, Nihon University. Her research interests include management philosophy, history of management thought, and anthropological approaches to business administration. She is the author of Shakaiteki Networking-ron no Genryu: MP Follett no Shis , [An Origin of Social Networking Theory: The Thought of MP Follett] (in Japanese) (2009), the editor of Asia-kigy  no Keieirinen: Seisei Denpa Keish  no Dynamism, [Management Philosophy of Asian Companies: Dynamism of Creation, Diffusion and Succession] (in Japanese) (2013), and a co-editor of Enterprise as an Instrument of Civilization (2016).