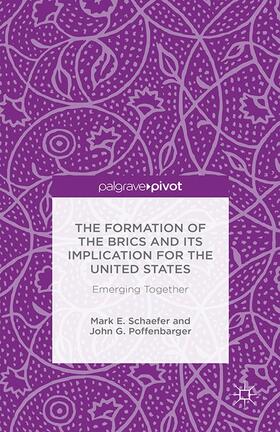 Schaefer and Poffenbarger assess whether the BRICS nations (Brazil, Russia, India, China, and South Africa) are attempting to balance US power and analyze the United States' responses to the creation of this IGO through a mix of theoretical and policy-focused approaches.

Dedication Page Table of Contents List of Graphs and Charts 1. Introduction: Are these BRICS for Building? 2. Are the BRICS a Sum of their Parts? 3. The BRICS in Action, Well Maybe 4. The Power of Development and the Africa Strategy 5. Are thes BRICS for Real? The Impact on the United States and the US Response Appendix: Graphs and Charts Bibliography

John G. Poffenbarger is Associate Professor and Chair of the Department of Social Sciences and Modern Language at Wheeling Jesuit University. He earned his Ph.D. from West Virginia University in 2005.