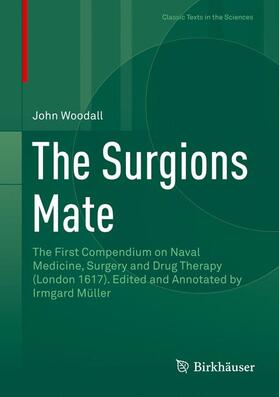 This book reproduces and comments John Woodall’s handbook which was used as standard text for medical treatment at sea in the seventeenth century and was the first instruction for medical service aboard on the whole.

In 1612 the East India Company, founded in London 1600 and invested with special royal privileges and authority, appointed John Woodall as its first surgeon-general, who had gained great medical experience at theatres of war abroad. Woodall was appointed the task to radically reform the medical aid on sailing ships and to supervise the education of talented ship doctors. He was the first one to establish standardized regulations concerning the provision of instruments and medicaments on board. To this end he wrote an instructive manual for ship surgeons with the title “The Surgions Mate”, published in 1617 in London and edited repeatedly until 1655, listing essential instruments and remedies for the use at sea and providing detailed annotations. The manual’s particularities include notes on the portion of paracelsian drugs, the first enema of tobacco, the treatment of gunshot wounds and the strong recommendation of lemon juice against scurvy. Moreover, descriptions of injuries, instruments, and many diseases as a result of Woodall’s extended personal observations at sea are given.


The present edition of this exceptional classic includes comprehensive annotations on the first medical chest and its application on sailing ships. Also, the implications of Woodall’s achievements in regard to the development of ship medicine and pharmacy in other seafaring nations are discussed. The book will appeal to historians of medicine and interested readers alike.

Short biography of the author John Woodall.- Presentation of the hygienic conditions on board of trade and war ships around 1600.- The beginning of ship medicine and drug provision on board of sailing ships in the 16th and 17th centuries.- The impact of John Woodall's handbook "The Surgions Mate" (London 1617) on the development and formation of ship medicine.- A modern reproduction of John Woodall's "Surgions Mate" (London 1617).- Detailed commentary on the medical, surgical and pharmaceutical terms in the text.- List of drugs and surgical instruments mentioned in the work.- Index of alchemical signs.- John Woodall's medical and surgical accomplishments with regard to the development of ship medicine in other nations.- References.

Woodall, John
Prof. Irmgard Müller is Emeritus Professor in History of Medicine at the University of Bochum and an outstanding researcher in the field.