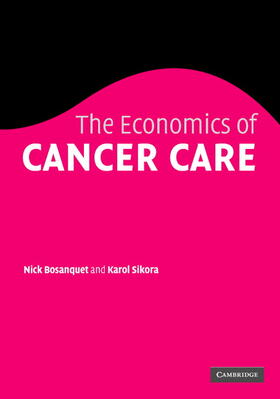 This book examines the interaction of economics and the delivery of cancer care in the global context. It analyses the causes of tension between those paying for care, those providing the care and those marketing drugs and devices. The concept and requirement for rationing is examined in different economic environments. As cancer increases in incidence and prevalence, the economics of providing care becomes a more important subject than ever before. Written by a leading health economist and oncologist, this is the first comprehensive book on the economics of cancer care and is essential reading for health professionals and policy makers alike.

Bosanquet, Nicholas
Nick Bosanquet is a health economist, currently Professor of Health Policy at Imperial College. He is a Special Adviser on public expenditure to the House of Commons Health Committee and a non-executive director of Richmond and Twickenham PCT. He is a consultant to HCA on developing their cancer services in London and has worked as an Adviser to WHO and the World Bank. He was formerly a Senior Research Fellow at the Centre for Health Economics at the University of York. Recent research has included the first full study of prevalence of lymphodema in the UK and joint papers with Professor Karol Sikora on the NHS cancer plan and on the future economics of cancer care.

Sikora, Karol
Karol Sikora is an oncologist and Scientific Director of Medical Solutions PLC and Special Adviser to HCA International in the creation of the London Cancer Group - the largest UK cancer network outside the NHS in HCA's six major London private hospitals. This includes the construction of a major new international cancer centre for care, teaching and research in London at the Harley Street Clinic. He is Professor of Cancer Medicine and honorary Consultant Oncologist at Imperial College School of Medicine. He is on the editorial board of several journals and is the founding editor of Gene Therapy and Cancer Strategy. He is a former member of the UK Health Department's Expert Advisory Group on Cancer (the Calman-Hine Committee), the Committee on Safety of Medicines and remains an adviser to the WHO Cancer Programme.