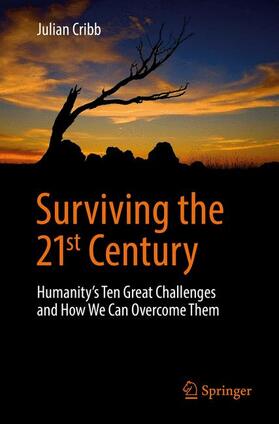 Humanity's Ten Great Challenges and How We Can Overcome Them

The book explores the central question facing humanity today: how can we best survive the ten great existential challenges that are now coming together to confront us? Besides describing these challenges from the latest scientific perspectives, it also outlines and integrates the solutions, both at global and individual level and concludes optimistically. This book brings together in one easy-to-read work the principal issues facing humanity. It is written for the two next generations who will have to deal with the compounding risks they inherit, and which flow from overpopulation, resource pressures and human nature.

The author examines ten intersecting areas of activity (mass extinction, resource depletion, WMD, climate change, universal toxicity, food crises, population and urban expansion, pandemic disease, dangerous new technologies and self-delusion) which pose manifest risks to civilization and, potentially, to our species’ long-term future. This isn’t a book just about problems. It is also about solutions. Every chapter concludes with clear conclusions and consensus advice on what needs to be done at global level —but it also empowers individuals with what they can do for themselves to make a difference. Unlike other books, it offers integrated solutions across the areas of greatest risk. It explains why Homo sapiens is no longer an appropriate name for our species, and what should be done about it.

Cribb, Julian
Julian Cribb is an Australian author and science writer. A former newspaper editor and science communicator; his published work includes over 8000 articles, 3000 science media releases and nine books. He has received more than 30 awards for journalism and is a fellow of the Australian Academy of Technology, Science and Engineering and the Australian National University Emeritus Faculty.
His internationally-acclaimed book, The Coming Famine (University of California Press, 2010) explored the question of how we can feed 10 billion humans this century. His book Poisoned Planet (Allen and Unwin 2014) investigates the contamination of the Earth system and all humanity by man-made chemicals. Surviving the 21st Century is the third book in his trilogy about how humans can overcome the existential risks our success has brought upon us.